I greatly appreciated your confidence and frankness in talking to me on Wednesday about the larger aspects of the world war. I have very strong convictions regarding some things that have to do with international policy and some other things that have to do with the practical conduct and prosecution of the war itself. It was very gratifying to me to feel that your sense of the application of principles to measures is as sound as your statements of the principles themselves.

This latest Congress message of yours has won great approval, not only from newspapers but from men of independent mind and judgment who think for themselves and who have sometimes been opposed to you. I have spoken with a good many such men, and they are now completely in accord with what you say.

You are being urged, naturally, by men who think in terms of their own special activity, to lay chief stress upon things which mutually antagonize one another. I do not really think you have a "single track mind", and I believe you realize fully that a number of things may be operating at the same time. Thus I attach great importance to your message to the Austrian people at the very moment when you joined Congress in declaring war against Austria. You notify them that you are not proposing to dismember Austria or to bring about a future crushing or humiliation of the Austro-Hungarian aggregation of peoples. At the same time that you arouse enthusiasm among the Italians, by making war upon their chief enemy and by planning to send some help and relief to the defenders of Italy, you are serving notice that the bargain which Italy exacted from the Allies, before going into the war, is no longer binding. If the Italians accept aid from you, they must admit at the same time that your aid is not to be used to bring about an unwarranted dismemberment of Austria. France, furthermore, in constantly soliciting and eagerly accepting American aid, is by necessary implication also accepting your principles regarding the aims and objects of the war.

In respect to the nature of our participation in the war, you could not naturally say very much in public. But I feel that you have a wise sense of the apportionment of effort. For my part, I am thoroughly opposed to the policy of sending very large masses of infantry to France. I believe that those civilian leaders who advocate this policy are totally mistaken, and that the Army men who are working for it are blind to the facts of the situation as a whole.

If this is to be a very long war, we must conserve our resources in order to apply them at a time of our own choosing. We can defend ourselves against the whole world for a thousand years if we choose our own times and places. We can produce everything that we need, within our own continental area. We were brought into the war by interference with our rights on the sea; and we cannot develop the Navy too fast or advocate too energetic a naval policy on the part of England and the Allies.

Our great contribution to the immediate cause abroad should be supplies of all kinds and the highly specialized services such as aviation, surgery and Red Cross aid, and ships without limit. We have many who say arbitrarily that the war is to be won by fighting on the siege line of the Western front. On that line the Germans are operating a series of buzz-saws, and the Allies are operating a series of wood-piles. The buzz-saws are occasionally dulled and put out of order, but the wood-piles melt away much more rapidly than the buzz-saws wear out.

I do not think you could make a greater mistake than to take a million or two of American boys, from all over the United States, and merely feed them into the German machine along this siege line that extends from Hamburg to the Adriatic. The Allies already have far more men than the Teutons have on that line. Naturally we must be represented there. But the Allies need from us, chiefly, the certainty that we can continue to give them surplus food and supplies and can find the shipping as against the submarine peril.

I believe that while this siege line is being held, flank operations could detach Turkey in comparatively short order, and that Bulgaria could next be brought to rights. Of the four people in the Balkansnamely, the Serbians, Greeks, Bulgarians, and Rumaniansthe Bulgarian people are the best and most reliable. Unfair treatment and stupid Allied diplomacy forced the Bulgarians in the wrong direction. The Italian reverses ought to make it much easier to deal with the Bulgarian problem on wise political and diplomatic lines.

I have not hesitated, while supporting your policies with good will and sincerity, to express my own views to the readers of the Review from month to month. We have many more readers now than ever before, and they are in every county in the United States. I find these elements of public opinion with which I am in touch to agree with me that the development of our Navy, the development of our aviation policy, the tremendous development of our land and sea transportation, and your policies of finance, of thrift, and of large agricultural and mechanical production, are of relatively greater importance than the policy of taking out of industry millions of men for immediate standing armies.

We have done well thus far, because we need to train many officers and to create a system under which, if necessary, we could rapidly train five millions or even ten millions of soldiers. But with this machinery at work, we ought naturally to keep as many men as possible at work in the mines, in the shipyards, and on the farms. If we transport too many of them to France, we shall not only cripple our ability to produce the food and supplies that our allies demand, but we shall greatly increase the unrest and anxiety of the country by reason of the disadvantages under which our boys are to be placed in fighting at great distance, on foreign soil.

The war has two great aspects to be considered. One of these is the worldwide aspect. The other is the strictly European. The first of these is what has most engaged your thoughts. Of course the two are intimately connected. But, generally speaking, it seems to me that American effort should be guided by America's relation to the worldwide war, while Europe's effort is more directly engaged with the line fighting within European points. The problem of the seas and of ships is worldwide. The doctrines of justice, good will, honesty, are of worldwide bearing. The future of the Turkish Empire as well as the future of China is of worldwide concern.

I am troubling you with a set of our "Presidential Messages and State Papers, in ten volumes. This is the first set that has come from the printers. I shall a little later have a specially bound set for you, and this first one can be passed over to Mr. Tumulty or somebody else. The old Richardson set did not, of course, cover several recent administrations, and it is not convenient for ordinary use.

If you have a few moments to glance cursorily at the set, you will see that the first nine volumes are occupied with the Messages and Addresses of all the previous Presidents, and the tenth volume is exclusively devoted to your utterances. This makes it possible to continue to expand the tenth volume. While binding the tenth volume uniformly for the purposes of this set, we shall also bind it separately and distribute it independently of the rest.

We are now bringing the Wilson volume up to date by adding the Buffalo Labor speech, two or three briefer utterances, and the great Message to Congress of the present week. In a short time we shall have the revised edition ready, with these documents included. I had taken the liberty to write to Mr. Rudolph Forster, to have him ascertain if there were other utterances of recent date that ought to be included. We think that it is well to put in the little message to Brazil on her entering the war, your Thanksgiving proclamation of this year, and one or two other such matters. If there should be anything else that belongs appropriately, we would be glad to have further word from Mr. Tumulty or Mr. Forster.Besides this Brazil message there is one that relates to Greece, and another to the Liberty Loan. These things, while brief, seem to us to have a permanent historical value and to enrich, therefore, the collection we are makingalthough this collection of course does not pretend to be exhaustive. The Taft"Roosevelt material has been very much cut down by our editor of the volumes, because while it was very voluminous much of it did not seem for our purposes to have premanent reference value for the ordinary citizen or student.Please pardon so long a letter, and believe me, with great respect and regard, 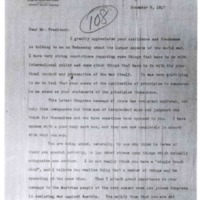