Address of the President to the ladies representing Woman Suffrage,
at the White House,
Thursday afternoon,
3 October, 1918.
_____________
I just wanted to say, Mrs. Catt and Ladies, and I can say most unaffectedly, that I do not deserve your gratitude. You know, some of you have regretted the fact, that I was slow of conversion to this cause, but I do not see how any man's processes of conviction can be slow in the presence of the influences now abroad in the world. So that when my conversion to this idea came, it came with an overwhelming command that made it necessary that I should omit nothing and use the position I occupied to enforce it, if I could possibly do so. I pride myself on only one feature of it, that I did understand when circumstances have instructed me. There are some men who, I am sorry to say, have recently illustrated the fact that they would not learn. Their minds are provincial. They do not know a great influence when it is abroad. They have given themselves a life-long task. They will have to explain for the rest of their lives. And I should like to tell some of them that, having been a historian myself, I can assure them that historians are very dull persons and do not accept ingenious explanations, and that therefore history will deal very candidly with the circumstances in which the head of a government asked the kind of support that I asked the other day, and did not get it. It is one of the serious circumstances in the history of the United States. I have to restrain myself sometimes from intellectual comtempt. That is a sin, I am afraid, and being a good Presbyterian, I am trying to refrain from it. But I had not meant to dwell on that side of it. I want to say that it has been a matter of deep gratification to me to have the opportunity to render service, such as it was, and I want you to know that my heart not only, but my conviction and my purpose was with you, and I was speaking from knowledge. The other day, when I told the Senate that I had not been listening to the public men, I had not been listening to editors, but I had been listening to the heart of the world, which comes to me with very authentic throb, through many instrumentalities which it has set up. There are all sorts of under-currents which are growing more and more powerful and are perceptible in the official dispatches, and come to me in all sorts of letters and communications. There seems to be growing a great voice in the world which it will be very dangerous for any statesman not to pay attention to. It was to that voice that I thought, and still think, that I had been listening, and that voice speaks with very authentic tones. So that I want to repeat again that I do not deserve your gratitude. I am only proud to cooperate with you. 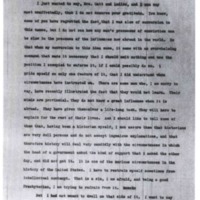