My dear Colonel House
For your kind reception and open-hearted talk which I had the pleasure of enjoying in New York, I wish you to accept my warm and sincere thanks.

According to your suggestion, I have since prepared a memorandum succinctly setting forth the point which found a part of our conversation and I am taking the liberty to send it to you for whatever you may see fit.Mr. Oscar S. Straus called on me two days after I had the pleasant interview with you, and he was telling me about his idea of making the most of the present trend of things for fostering better relations between our countries. It is indeed gratifying to find evidences indicating that a more serious interest in our relations is actually being taken in this country and especially among men of great influence.
With high regard and cordial wishes, I beg you, Dear Colonel House, to believe me,
(Signed) Aimaro Sato. 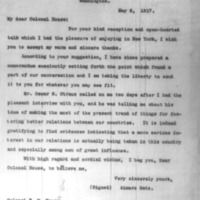