Whereas John Burton, alias Samuel R. Martin, alias Dr. Engleman, was convicted in the Supreme Court of the District of Columbia of grand larceny, and on July thirtieth, 1915, was sentenced to imprisonment for ten years in the United States Penitentiary at Leavenworth, Kansas; and, Whereas, on the same date an appeal was noted to the Court of Appeals, District of Columbia, which was finally withdrawn January eleventh, 1916, and the defendant was committed to the penitentiary January twenty-first, 1916; and, Whereas, it has been made to appear to me that the ends of justice would be subserved by restoring to the said John Burton, alias Samuel R. Martin, alias Dr. Engleman, his civil rights.
Now, therefore, be it known, that I, Woodrow Wilson President of the United States of America, in consideration of the premises, divers other good and sufficient reasons me thereunto moving, do hereby grant unto the said John Burton, alias Samuel R. Martin, alias Dr. Engleman, a full and unconditional pardon, for the purpose of restoring his civil rights. In testimony whereof I have hereunto signed my name and caused the seal of the Department of Justice to be affixed.
Done at the City of Washington this seventeenth day of March, in the year of our Lord, One Thousand Nine Hundred and Seventeen, and of the Independence of the United States, the One Hundred and Forty-first.
By the President:
Attorney General. 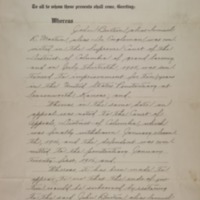