Sec. 27.
That the Federal Reserve Bank shall from time to time purchase from the national banking associations, at prices not over par and accrued interest, the two per cent. bonds of the United States, having the circulation privilege, up to an amount not exceeding their par value, one-half of the amount of circulation of the national banking associations from which purchased, and thereupon shall assume responsibility for the redemption and retirement of the notes of each such national banking association, to the amount of the bonds so purchased from it, which assumption and responsibility shall constitute payment to such national banking associations for such bonds.Immediately after purchasing any such bonds the Bank shall exchange them with the Treasury of the United States for an equal amount at par value of three per cent. notes of the United States, payable within one year of the dates of their issue, at various periods, as determined by the Secretary of the Treasury, which at the Bank of any of its branches. All such notes to be issued under regulations to be prescribed by the Secretary of the Treasury as to the form and tenor thereof, are hereby authorized. Upon the maturity of any such notes, the Bank shall, for a period of twenty years from the organization of the Bank, at the option of the Secretary of the Treasury, accept and pay for to the United States new notes of like aggregate amounts and similar form and tenor. The Bank shall pay to the United States out of its earnings and before reimbursement to the United States for the advance of seven million dollars, herein provided for, a tax of one and one-half per cent. per annum on the amount of its circulating notes equal at par to the amount of such Treasury 3% three per cent. notes from time to time outstanding. a tax of one and one-half (1½) per cent per annum on an amount of circulating Notes equal to the amount of such Treasury three per cent Notes outstanding. 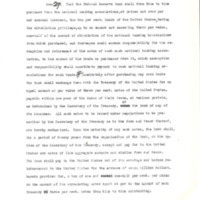