I have been to church and been to see Mrs. Brown and now I will write my little letter to you before going up to loaf a little. It is a pleasure not to be so driven as I have been all last week; especially to have plenty of time for Father. I have been with him most of the day when not at church. He seems cheerful though he had an attack yesterday. But it was not one of the painful ones. I was surprised, for he had seemed so very well before, walking a good deal for him. I think it was possibly due to too much fruit. We are getting fine peaches now and with the rich cream we are living high.

Mr. Thompson sent a mason who is going to estimate on plain chimney-tops; and Mr. T. will have his workmen put up the scaffolding at cost price, which will save us quite a good deal. Tell me what you think of the plain chimneys that you see about there. The one I am having him estimate on is like those on Mr. Thompson's house which I like very well. It is something like this. I am afraid that doesn't give the idea! it is just one row of brick projecting a little below the top. I think it can be done cheaper and more promptly now than later. Shall I let him go ahead? I really prefer it to terra-cotta tops.

If you feel like it, it would be quite a help to go to Caproni's, select the “faun” and see if the plaster pedestals will do. They are like a piece of fluted column. The figures ought to stand rather high in that high-ceiled hall; as high as your Washington whose pedestal is 3 ft 11 in. Of course it is the “Marble Faun,” of Praxiteles,— and Hawthorne! You could have it shipped at once, & the two pedestals if you like them.

There is no news either in town or college,—except indeed this item in the paper which interested me though I don't know the people, “Mrs. Van Doren of Van Deventer Ave. is visiting her husband who lives in Peekskill NY.”! I hope it will prove a joyful occasion.

Mac Thompson told me a queer thing, viz., that “C. C.” told him in May that “Dr. Patton was to be crowded out at commencement” and you put in”,— and that he also told him the whole story! A very foolish, imprudent C. C.! He said to Thompson, “Mac you must keep it a dead secret, though I just can't! I've got to tell you!” He said that after the election he happened to go up to the Inn with C. C., and that he and Miss Cuyler rushed into each others arms and embraced passionately on the strength of it. You ought to hear how Thompson talks about you. He says he is going to have that letter you wrote him lately framed!Madge and I have had the greatest fun reading “Abner Daniel.” I wish you had it with you; that household would enjoy it especially. Rome is the metropolis of the country! Rome girls visiting in the place overawe the natives with their smart costumes and city ways. And there is a good joke on Mr. Tedcastle; one of the minor characters is named, Tedcastle, (called Teddy,) and is the greatest fool in the book! All the people have the familiar old names. We are in love with Abner himself;—such an improvement on “David Harum,”—just as witty and so much more mellow, wholesome, honest & good.— I am perfectly well,–not tired at all– and I love you, my darling, unspeakably. You are the very life of me. I literally think of you all the time; nothing else ever crowds you out. (Love to all from M. & me.) 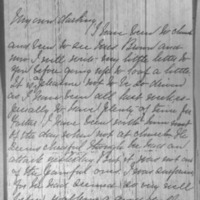