Herbert Hoover write to Joseph Tumulty about the White House issuing a statement regarding the closing down of breweries and sends a draft of such a statement.

With regard to the action of the House in stipulating for closing down the breweries, it seems to me that the time has arrived when some sort of statement on the subject might well be made from the White House.

I have drafted a short memorandum on the reasons for the action hitherto taken by the Administration in this matter and I am wondering if you would see if the President thinks it desirable to make such a statement; if so, whether you would issue oit from the White House with all the authority of that quarter behind it? 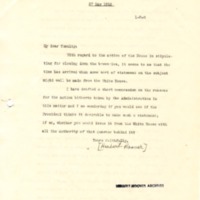