I have received your letter of the 19th inclosing the memorandum presented to you by Mr. Hurd and his associates. Most of these gentlemen have already discussed these matters at length with us. I do think, however, that oit is desirable to set out this situation on the points raised by these gentlemen sofaras we are able to penetrate into it. I, therefore, attach rather a full memorandum to that end and upon which yoju may desire to secure Secretary Houston’s views before using as it concerns production matters.In addition to the statement contained therein in regard to the packers, I would like to say tthat, as you know, I have no great love for the packers and they have been very difficult to deal with. They do control prices in the sense that every group of middlemen operating in large units control prices to some extent. That is, they control prices more or less from day to day and in the particular sense as to the price they pay for individual cattle and sheep and the prices at which they make individual sales. On the other hand, in the long run, even they cannot control the great forces aof supply and demand. By the methods which we have employed in limiting their profits we have endeavored to restrain the large ones from diriving the little ones out of business and have tried by our large buying orders for abroad to keep the plants bothe large and small running at full capacity. We have not detected and we are not certain they have not been making excessive profits since November 1st, although they appeared to have made a very large profit prior to that date. Their sworn statements to us as to their monthly operations show that they have operated at a very small margin or even a loss for the last two months. We are anxious that the Federal Trade Commission should give us the use of their staff of accountants to check up these statements, as it is a very involved and complicated matter in which their own staffs have already had valuable experience. This work is in the nature of cost accounting similar to that in certain branches of the Government and I understand if some direction were given by you to the Federal Trade Commission they would place their staff at our service. I am wondering if you would be so kind as to instruct them to undertake this work.

It is only fair to say with regard to the packers that they have performed an indispensable service for war purposes. We have studiously kept away from the discussions as to their previous career and private character, and I acan say that they have advanced very far during the last three months in performing a work of national service. 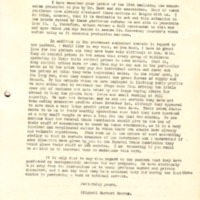