Referring to our conference with you on Monday, October 27, 1913, and complying with your suggestion, we agree that we and our companies will faithfully observe the statutes of the State with relation to coal mining and do everything in our power to see that they are fairly and definitely enforced. We refer particularly to the following statutes mentioned by you:–

1. Section 3925 Revised Statutes of 1908, with reference to the right of the men to organize and belong to Unions.

2. The coal mining act of 1913, Section 113 of which provides for the employment of check-weighmen.

3. Section 6989 Revised Statutes of 1908, making it unlawful to use or employ, directly or indirectly, the so-called “truck” or “Scrip” system in the payment of men
.4. Chapter 95 of the Session Laws of 1913, regulating and limiting the hours of employment in all underground mines to eight hours within any twenty-four hours.
In addition to the foregoing, we agree that all our employes shall have the absolute right, without coercion of any character, to trade at such stores or other places as they see fit and they shall be left absolutely free to buy whatsoever they desire wheresoever they will; that all men shall have a semi-monthly pay day, in accordance with the practice which now prevails substantially throughout the State; that all employes who have suspended work or gone on strike shall be given employment, except where their places have been filled and where they have been guilty of violence or other unlawful acts.
While we insisted in our interview with you, that we had always been governed in the operation of our mines by the laws of the State, we wish now to confirm the verbal assurance we gave you in that regard, and renew our request that you enforce fully and fairly the Statutes referred to.
We further wish to assure you that it is our intention to continue to operate our mines on the open shop principle under which most of the mines of Colorado have been operated for more than thirty years.

The words “EXHIBIT ‘H’” are typed on a small piece of paper attached to the upper right corner of the page, and cover most of the date. 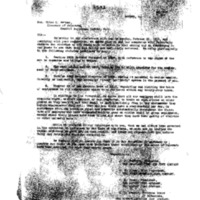