Made by W. Monroe Trotter of Boston in behalf of delegation of National Independent Political League, which supported Woodrow Wilson for election.

No equality, freedom or respect in segregation.
______


There can be no equality, freedom or respect from others, in segregation by the very nature of the case. Placement of employees on any basis except capability is out of the usual course.

Segregation such as barring from the public lavatories and toilets and requiring the use of separate ones must have a reason. This reason can only be that the segregated are considered unclean, diseased or indecent as to their persons, or inferior beings of a lower order, or that other employees have a class prejudice which is to be catered to, or indulged.

If the segregation is for the first or second reason, the Federal Government thereby puts an insult upon its own citizens, equal by law, unparalleled in the history of any nation since governments were established among men. If the last two are the reasons, the Government deliberately denies equality of citizenship, in violation of the Constitution and makes an inferior and a superior class of citizens. No citizen who is barred because of the prejudice of another citizen can be his equal in citizenship. By subjecting the former to the latter’s prejudice, the Government denies equality. The indignity of such a segregation is indisputable, for the public have a right to draw their own conclusions as to the reason.

None other of the many racial elements of the citizens are thus treated. That they would regard it as an insult and an indignity will not be questioned anywhere. If separate toilets are provided for Latin, Teutonic, Celtic, Slavic, Semitic and Celtic Americans, then and then only would African Americans be assigned to separation without insult and indignity.

The separate eating tables admitted by Secretary of the Treasury McAdoo, likewise means a declaration of a foulness, indecency, disease, rudeness or essential inferiority, by the Government itself, or a decree that these citizens barred from the general tables shall be subjects of the race prejudice of all the others. This means inequality of citizenship.

All this is true of segregation at desks or in rooms, already notorious under the auditors of the Post Office, the Navy, in the Post Office Department, the Bureau of Engraving and elsewhere. Secretary McAdoo admits a rule against “enforced and unwelcome juxtaposition of white and Negro employees.” This is segregation, and of American-American employees at the behest of the prejudice of all other racial classes of employees. It is clear and definite subjection of one element of citizens to the race prejudice of other citizens. It denies equality of citizenship to the former, in fact, unsettles their citizenship altogether.

For the rule is open to abuse and African-American employees are thus exposed to possible discrimination of any kind.

This segregation denies equal freedom and equal opportunity to employees of African descent as compared to all others, for it makes more difficult their placement and tempts to, if it does not insure, arbitrary limitations for race to advancement and promotion in a field more limited than that of all others in the reverse ratio of their numerical proportion.

If Scandinavian, French, German, American, Russian, Italian, Jewish and Irish employees are to be publicly subjected to this rule of “unwelcome juxtaposition” to employes of other races this discrimination would soften in its asperity.

No Necessity For It.

Necessity can not be pleaded as an excuse for this affront and injury. Afro-Americans and other American employees have been working together, eating at the same tables, and using the same lavatories and toilets for two generations. They have worked in peace and harmony and the Government’s business has been well executed. Some of the very Afro-Amrican clerks taken from rooms where Americans of other ancestries worked, or from seats in juxtaposition thereto have so worked for twenty-five and thirty years. They did so through two Democratic Administrations.. These Democratic Administrations were nearer the abolition of the slavery of African Americans than yours, Mr. President. The same efforts to inaugurate this segregation in Government service were made under your illustrious predecessor, the late, President Grover Cleveland, and were stopped by his order, as we trust they will be in short by yourself.
The inauguration of this policy therefore can be attributed to no cause but the personal prejudice of your appointees in the Executive Branch of the Government. Never before was race prejudice and race distinction made official under our National Government, never before incorporated in a National Government policy.undeserved blow.

We can not believe that after this concrete evidence of its offensiveness to your Afro-American fellow citizens, you will permit this mistaken practice to continue. In the first place, these, your fellow citizens, do not deserve this damning blow at your hands. Their class have helped build this nation from the very formation. They have defended it in every time of peril. Theirs was the first blood shed for the country’s independence and it has been shed in every war to protect and preserve the Republic. They have been sore oppressed, but toiled on and struggled up and the semi-centennial of their liberation is most inappropriate of all times, for this National Government to which they have been ever loyal to inaugurate a new humiliation, a new handicap, a new slavery of caste, to resurrect incidents of the old slavery now happily forgotten.

They deserve it not from you, Mr. President,, for never in their history did they so overcome traditional fear of party and section as they did last year in voting for you. Thousands upon thousands of them were your friends, and will so remain if there be no segregation and injustice, no stain upon your record and that of your Administration.

They did not expect and cannot believe they will receive this blighting blow from you, a blow such as no other of the varied elements of their fellow citizens have received, because of your assurances when their votes were wanted, that “If I am elected President, I will enforce the Federal Law in its letter and spirit, nay more, in the spirit of the Christian religion. I shall be a Christian gentleman in the White House,” and that you would accord equal rights and even-handed justice to all regardless of race or color. No fair man would say that African-Americans could find these words of promise consistent with a new executive policy of separate toilets, separate eating tables, separate working desks, separate wash rooms for them and for them alone of all the many racial classes in this Republic. Nor would history’s verdict be that they square with segregation of this element.

We told you in person before election our fear of Southern sectional prejudice and asked you then, as a condition of advising African-Americans to support your candidacy, whether you as Chief Executive would protect us from its extension and you said you would. In what was tantamount to an agreement with these ten millions you wrote to your “Colored fellow citizens,” “It is my earnest wish to see justice done them in every matter, and not mere grudging justice, but justice executed with liberality and cordial good feeling. Every principle of our Constitution commands this and our sympathies should also make it easy.” Fairer words were never written and their readers could not possibly have expected their author to countenance the institution of any new policy in his own branch of the Government now admittedly based on racial prejudice against them, a policy of caste which no President would dare even hint for citizens of any of the many other racial extractions which make up our heterogenous and partly immigrant population.

It is preposterous to plead benevolence for such a policy. Oppressors from time immemorial have declared oppression good for its victims. The world is no longer thus deceived. As there is no benevolence in despotism and tyranny and subjugation, so there is none in segregation and caste. As you declare for action in the direction of greater freedom for the distant Philippino, so we appeal to you, not to permit a new policy of more limitation for citizens at home. Do not take from us now as President what you called us as candidate, “fellow-citizens,” for segregation forbids “fellowship.”

The Petition of Protest.

We confidently believe that the protest of African-American from east, north, west and south, from laborers, artizans, clerks, business men, professional men, from lodges, from churches, from men and women of high and low degree, such a protest as they have never made on any Federal policy, a protest only just begun, convinces you that Colored Americans did not interpret your words to mean segregation; convinces you that they regard it as unjust, un-Constitutional, un-Christian and an undeserved limitation, degradation, a terrible injury, and by virtue of its influence for contempt, for mal-treatment, for race discrimination, for curtailment of industrial freedom and civil rights, a calamity.

If Colored Held Not Insulted.

There is no escaping the fact that to justify racial distinctions in citizenship, a treatment of Government employees on any basis but fitness, without any regard to race, on the ground of a benefit, is to insult the intelligence of the subjects of the treatment. No less is it true that for a President or a Government to maintain that any segment of citizens by racial extraction or ancestry can be expected to consider segregation in Goverment employment from all the other classes of citizens other than insulting, humiliating, unjust, intolerable, and hostile in itself, constitutes a declaration that they are innately inferior to all their fellow citzens.Mr. President, segregation of one class for ancestry is a wrong and injustice, which no class can accept. It compels resistance forever. Nothing else, however good, can compensate or offset it. It poisons everything. There is no antidote.Your administration has had, but for this, an auspicious beginning. Wipe out this blot, apostle of the “New Freedom,” put no limitation on any being for race, advocate of “neighborliness all around,” set up no barriers between citizens.
A preliminary endorsement has even given your cause by the elections just ended, but in New York and Massachusetts your party deplored this segregation.

Again we say, that our hope is in you, in your allegiance to your oath of office, your sense of justice, your personal integrity. For we cannot believe that you would stain your own honor or the record of your administration in history to satisfy sectional prejudice. 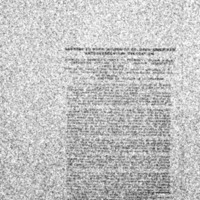