John Purroy Mitchel writes to Woodrow Wilson resigning as Collector of the Port of New York in order to run for mayor of New York.

I beg hereby to tender my resignation from the office of Collector of the Port of New York.
The active and engrossing part of the work of the campaign for the Mayorality of New York, in which I am engaged as a candidate, has set in, and, while the Collector’s office is so well organized as to make it quite improbable that the Government’s interests would suffer during the four weeks of the campaign, I feel that, as I am engaged in a local political contest, I owe to you the duty of offering my resignation.
The study of the organization and methods of the customs service at this port, instituted by me upon assuming the Collectorship, has made rapid progress. The reports and recommendations of the special staff will be in the hands of the Secretary of the Treasury not later than November 1st. It will then remain only to secure the approval of the Department and to make practical installation at New York. The results, both in economy of administration and in efficiency of the service, will exceed the estimate submitted to you at the time you gave approval to this work. It is also gratifying to know that we have worked out a basis for these reorganizations that will avoid the necessity of dropping from the employ of the Government any of the present staff of efficient employees. Neither does our plan contemplate salary reductions.
I take this occasion again to express my appreciation of the honor of having been allowed to serve under you. The privilege I have enjoyed of close official contact with yourself and my immediate superior, Secretary McAdoo, quite as much as the importance and attraction of the work of the Collector’s office with its fine corps of public servants, makes it very difficult for me to resign. I feel strongly, however, that this is my proper course. 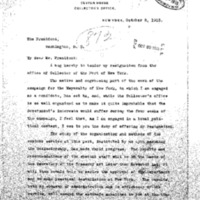