Press release on the recent "Conference of Colored Editors and Leaders" held in Washington, DC.

Already there are numerous evidences that the recent conference of Colored Editors and leaders held in this city in June, which was called by Emmett J. Scott, Special Assistant to the Secretary of War, at the Suggestion of the War Department and the Committee on Public Information, to consider the relations of the 12,000,000 Negroes in this country with the general government itself, and to discuss ways and means how each might cooperate most effectively in the work of winning the present world-wide war, is bearing fruit. Three results of the most significant character have been worked out within the past fortnight that fully justify the holding of the conference and other issues not less far-reaching are well on their way toward a satisfactory conclusion.

The first in importance and human interest of the helpful results that may be said to have grown directly out of the recent conference of editors, and the cooperation of Negro leaders and friends of the Negro people, is the frank, positive and unequivocal declaration of the President of the United States against the mob spirit, which has been sent to the four corners of the earth by cable and through the newspapers of this country. President Wilson firm stand for law and order ranks with the finest of the great state papers that have emanated from the White House, and it has electrified the entire country as it has seldom been thrilled before.

It will be remembered by those familiar with the proceedings of the conference at the New Interior Department Building that the full force of the leaders who spoke was marshaled in opposition to the lynchings, burning and inhuman mob violence practiced mainly against colored people in various sections of the country, and that this lack of respect for the common rights of citizens was given as the most potent cause for the unrest among Negroes. This was the underlying reason for bringing the conference together from far-distant points. The proceedings of the Conference reached the President through the Committee on Public Information of which Mr. George Creel is Chairman.

The President's message is a wholesome rebuke to ruthless violators of the law, who almost invariably think they will be immune from punishment by the courts or by an outraged public opinion.

The colored people are jubilant over the timely and straightforward pronouncement of the President of the United States and that such an utterance from the highest authority in the land will cause a wave of patriotic enthusiasm among them and inspire a keener impulse to assist in the many constructive war activities throughout the Republic can not be doubted.

COLORED WOMEN REJOICE IN OPPORTUNITY TO BE WAR NURSES

The second outstanding achievement growing out of the conference is the opening made for the employment of the large number of colored trained nurses who have patriotically registered their names with the American Red Cross Society for work among the colored troops on the field and in the base hospitals. The conference strongly urged that these skilled nurses be used at the earliest possible opportunity.

According to an announcement made through the office of the Special Assistant to the Secretary of War last week, plans have been laid by the Surgeon-General of the Army to have colored nurses assigned to six of the base hospitals in this country where approximately 38,000 colored troops are stationed; namely: Camps Funston, Dodge, Grant, Taylor, Sherman and Dix, and with a practical certainty that these skilled agents of mercy will have a further opportunity for service among the colored soldiers overseas. With the constant increment of colored men in the army the number of women to be utilized must be correspondingly enlarged from time to time, with a constantly expanding area of usefulness and [illegible] influence. This signal triumph has heartened beyond measure the women of our land, who are called upon on time of war to make the heaviest sacrifices - and yet are the most willing to sacrifice and to serve when called upon to do so. This is the second big achievement that may be justly credited to the recent conference and it will prove to be a vital factor in alleviating the unrest that has been breaking down the morale of Negro Americans.

COLONEL YOUNG MAY SOON BE RECALLED TO ACTIVE DUTY.

The early recall to active duty of Colonel Charles Young, the idol of the young colored men of red blood and sturdy public spirit, also urged by the conference, is before the War Department. It has become known that the Secretary of War from the very beginning has sympathetically considered the whole matter of utilizing the valuable military experience and services of Colonel Young, who, until his retirement some months ago, was actively identified with the Regular Army.

The two concrete results here referred to, and the third one now "on the lap of the gods", would seem to justify the recent Conference of Colored Leaders and Editors, who sacrificed time and business interests to crystallize requests into tangible realities, and demonstrate the value of intensive cooperation with the National Government. 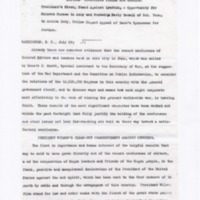 African-Americans in the military, Convention of Black Editors, race riots, Wilson against lynching