WHEREAS our country notwithstanding the end of a great war which was supposed to have brought a better assurance of the blessings of peace to humanity; and

WHEREAS the President of the United States of America has gone on record against mob violence and lawlessness of every sort and has declared it to be the purpose of the victors to make the world safe for democracy, and

WHEREAS the people of African descent in these United States have given every measure of devotion to the cause for which the nation took up the gage of war, and gave strongest proofs of their courage and fidelity to the nation during the dark days of peril and disaster, and

WHEREAS hundred of thousands men of the Negro race were enlisted and drafted to fight our common enemies in foreign countries and that they fought and have since returned showered with the praises of the French nation for their gallantry, and

WHEREAS during the war many men and women have been lynched, burned at the stake and otherwise humiliated, illtreated and oppressed in this land consecrated to liberty without law or due process thereof, and

WHEREAS such barbarous punishment of defenceless persons in the present age when we are endeavoring to teach Europe how to stop war and carnage, would in keeping with the resolution of the Senator from New York, that barbarous punishment which he seeks to ameliorate in Europe should be directed to the Southern States where a more christian spirit can prevail for the benefit of all citizens regardless of creed, color or previous conditions

THEREFORE BE IT ENACTED THAT THIS MOST WORSHIPFUL GRAND LODGE OF THE MOST ANCIENT AND HONORABLE FRATERNITY OF FREE AND ACCEPTED MASONS-PRINCE HALL- FOR THE STATE OF NEW YORK, assembled in our seventy-fourth grand annual convocation record ourselves as being unalterably opposed to mob law and the concomittant evils growing out of it. And that we here and now appeal to the good hearts of the nation, to the President of the United States and to the law makers of the nation to use every proper means moral and legal to remove this foul blot from the nations' escutcheon. 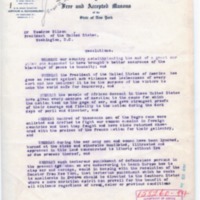