Recounting heroism of African American soldiers in France and requesting assistance regarding lynchings in the US.

May we venture to solicit the aid of your interest and powerful influence as the head of this nation on behalf of the oppressed negro race, always faithful and loyal to this country, an example of this fidelity was furnished you in France last week by the two volunteers who beat off an attack of over twenty Germans, saving a situation and whose courage and bravery was deemed worthy of citation of a whole army division and by General Pershing. These boys were fighting in obedience to your command for world democracy and for humanity's sake under the American flag. While fighting in France for American civilization nine members of this race were lynched in the State of Georgia, one of them a woman and another a man lynched and body burned near Johnson City, Tenn., this done in defiance of law and justice. Such vile and inhuman acts give aid and comfort to the enemy, dishearten and discourage our boys in training to fight the world's greatest despot and murderer of defenseless women and children. We call upon you for safety first sake to issue a proclamation to the American people to the effect that lynching and burning of negros by white mobs constitutes a crime against the nation and that you appeal to Congress to pass laws so declaring and we ask this in the name of justice and suffering humanity that you give the matter your immediate attention and oblige, 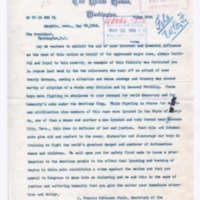