Baker writes to President Wilson that efforts to return the country to normal are moving along. There is no need for a reconstruction policy and Wilson should make that clear.

The Council of National Defense this morning held a meeting with representatives of the emergency war administrations to discuss the general question of a return to normal conditions. There were present, in addition to the members of the Council of National Defense, Mr. Baruch, Mr. McCormick, Mr. Leffingwell of the Treasury Department, Mr. Rickard of the Food Administration, and Mr. Garfield. Our conference came to the conclusion that the demobilization of the government machinery set up for the war is proceeding rapidly and satisfactorily, and that apart from certain orders needing your signature for the transfer of functions no specific recommendations need be made to you. There were, however, two subjects upon which the conference asked me to lay its view before you.

The first is as to the question of “reconstruction.” It was our unanimous feeling that the public opinion of the country has built up expectations about the matter of reconstruction which are based upon an erroneous assumption, and that some word from you, perhaps in your forthcoming address to the Congress, would have a salutary effect. There appears to be a general expectation that you will outline a “policy of reconstruction” which will deal in a broad way with the reestablishment of industry and commercial conditions, and be in the nature of a chart to business. This expectation we think can not be met, because it is formed of the assumption that there is something else to be done than merely remove restrictions and allow business and industry to resume its flow into normal peace-time channels. There is no necessity for governmental action looking toward the building of new lines of commercial and industrial activity in the United States; no great policy of fresh or additional access to raw materials is needed; no word can now be said with regard to the seeking of world markets in international trade; and therefore it was our judgment that some such thought as this might be wholesome.

“Reconstruction” as applied to this country’s problems is a misnomer; we did not so convert the industries of the country to war purposes as to require governmental action to reconvert them. The present problem is not one of reconstruction but of readjustment.

The resumption of American industry and commerce is a matter of removing from the enterprise of America those restrictions, temporary in character, which it was found necessary to impose during the period of the war. The absorption of material and labor of the country into the production of war supplies necessarily created shortages so far as domestic consumption was concerned. In order not to allow such shortages to bear unequally or to create unnecessary hardship, restrictions were imposed by the several emergency administrations created under the authority of Congress. Now that the war conditions have abated, all that is necessary for the industries of America to resume is that these restrictions should be relaxed and removed, and this is being done rapidly, with the expected result that American enterprise is taking advantage of its opportunity to reestablish the business of the country.

The restrictions imposed during the war had to do with limitations in the use of raw materials, priorities of access to materials and labor, and restrictions upon import and export trades. The War Industries Board has found it possible to relieve almost entirely the restrictions imposed by it; the War Trade Board in like manner is relaxing the control of imports and exports as rapidly as the terms of armistice permit, and as shipping is available beyond the necessary needs of the army and the food supplies of countries dependent upon the United States is freeing ocean commerce to profitable opportunity. The Department of Labor is cooperating everywhere throughout the country to restore labor to peaceful industries whose resumption has been made possible by the removal of these restrictions; the War and Navy Departments and the Shipping Board are readjusting their contract relations with the industry of the country and by prompt settlements in accordance with the terms of these contracts are rendering business men certain as to their obligations and their resources for the resumption of former or other production.

In the second place, our conference this morning felt that we ought to call your attention to the situation with regard to the guaranteed price of wheat; whether or not any statement to be made by you to the Congress at this time may be debated. The guarantee by the President’s proclamation covers crops sold up to June 1, 1920. The present stock of wheat in the country is very large; the Fall planting of this year is four million acres in excess of last year; the Spring planting is likely to be large. We are not yet able to say what the world’s need for wheat will be and can not, therefore, with certainty say there ought to be any discouragement to Spring planting; but it was our thought that a statement of the whole case might be made to the Congress so that there would be no sudden shock should it turn out that the restored activities of the European peoples enable them to supply in large part their own needs in 1920, leaving us with a large surplus production at artificially enhanced prices and a call upon the government to make good the guarantee by a very large disbursement of public money. At present arrangements have been made to take care of the crop now being marketed through the Wheat Corporation; but no machinery of any sort has been set up to deal with the stocks for sale in 1919; nor has any provision been made by financial legislation for the possibility of being obliged to pay the guaranty in money should the stocks prove greatly in excess of our domestic needs. Our only thought in this connection was that a statement of the facts as they are might be made to the Congress so that the appropriate committees could have the matter in mind and either now undertake the construction of machinery to deal with the 1919 crop or at least be saved from any surprises as to the demands which may be made upon them in the matter of financing in 1919 should the world’s stocks be so rapidly increased as not to consume the American surplus. 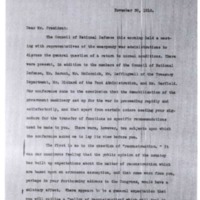