Austrians warn that harsh demands on Germany would lead to further militarism.

In recollection of the four months which we spent eight years ago in mutual work to keep peace between the great nations I take liberty of now addressing few words to you which may serve purpose of restoring Peace to whole world now shattered to its foundations and if God will of enduring Peace for all generations. I address these lines to you in common with two friends who like myself never from the beginning of the war joined prevailing war intoxication and therefore had to bear many hard word in our Austrian fatherland as well as in German Empire. As Austrians we are perhaps able to judge the mood of German people more objectively than one belonging to the Empire could do. President Wilson highly honored by us for his high ideals made known in two notes the condition under which he would be prepared to weigh the peace offer of Central Powers and to recommend it to consideration of those nations allied to American people. After deep transformation which war has effected in German people it is no longer some few individuals who decide according as they think best whether these conditions can be accepted but this decision lies with the millions of German citizens whose parliamentary representatives now have the power really as well as formally in their hands. That small but powerful group which already before war assumed itself authority at many decisive moments in destiny of German people and which during war literally grabbed the mastery over nation has by development of war lost its former influence entirely and for ever. Nowhere is that more heartily welcomed than by us in Austria. Henceforward German people will not allow itself to be dictated to by this nor by any other enforced authority. Taught by the awful experiences of war it has taken its fate in its own powerful hands and is eager and steadfast in work of democratic reformation of its government. In ordering the relation of citizen to state as well as in relations of states and peoples to one another it acknowledges the fitness, high moral worth and necessity of the points laid down by President Wilson’s programm especially of league of nation’s into which it is earnestly and irrevocably decided to enter and to remain in it by conscientious fullfillment of all its duties. The German people, however, can only carry out this programm in a manner fitting its own circumstances, traditions, and ideals. The more undisturbed it is permitted to go its way to this high goal of mankind, the less one tries to put it into leading strings, be more surely and swiftly will it reach this goal. Outside reproaches which it considered unfounded could henceforth only work as hindrance as also expressions of mistrust in sincerity of its intentions and aspirations towards lasting world peace. Conceivable as this mistrust was in regard to the former authorities, finally conditions which German people could only consider as humiliation would be refused or go far as they could be enforced on it for the time being only endured as long as necessity forced it to do so, as after tilsit German people, as soon as it only halfway renewed its strength, would raise itself up as one man against wrong done to it then but also only then disastrous power of militarism which President Wilson has proclaimed as his sublime task to destroy would revive again. This however, is what President Wilson and with him all friends of peace in all parts of world would wish to prevent.

Permit us Sir as men to whom the soul of German people is intimately known and who, with you, have no greater wish than to free world for all time from war in all sincerity as this great matter requires to draw your attention to this danger, we therefore beg to ask you and President Wilson to take these arguments into consideration in your answer to German note at present under discussion. 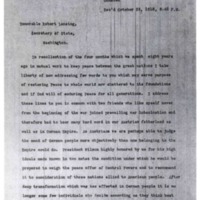