Jon Bouman to the Bouman Family

Jon Bouman to the Bouman Family

Letter from Jon Bouman to his family.

Evelina Suhler is the granddaughter of Jon Anthony Bouman and inherited the family collection of his letters from the years of World War I. She and her husband gave the letters to the Woodrow Wilson Presidential Library & Museum in 2013.

13 Place de la Bourse
Paris
the evening of my birthday

How nicely you timed your birthday letters! I found them (or it) as I arrived this morning at the office on my desk; a nice fat one! I am very delighted with all your letters and the photo to which I have been looking forward so long. I didn’t know what to think of it that I didn’t get one, whether it had gone astray or not. However I am very glad to have it. They are all immense young persons; Bill especially is fine, I believe he is turning handsome again. The girls, especially the Babe, look as though they are just going to sneeze. But they look allright, bless them, it did me good to see them; I shall give them some love bites in their shaven necks.

How lovely to have a garden full of roses which you don’t often get in town; I suppose they will be blooming throughout the summer, so I shall see them too.

Aha, so Master Bill is beginning with Latin: amo, amas, amat, and presently he will have mensa – mensae, mensam, etc. In course of time I expect he will beat his poor Dad at Latin; I never knew much of it. Keep at it, boy; I hope you will get the taste for languages; it is a never failing joy afterwards. What is that book you are reading:“Life on a Lightship” or “Light on a Lifeship?” I can’t quite make it out. Mother had to correct some of Bill’s mistakes and she made some herself ha ha! Can’t you spell “riots” Mummy?

I keep on collecting stamps so if Bill gets interested in them, he can have them. Otherwise not.

I am getting quite curious about this new home of yours and am wondering how long it will be before I am released from Paris.

Mary’s letter is very interesting; also the previous one about her walk through Hyde Park and Kensington Gardens; I could quite see them in my mind’s eye; the rhododendron bushes that I used to love even before any of you children were born, and Mary describes my favorite walk in Kensington Gardens; I used to know that part very well, living so close to it in Bayswater.

I was also pleased with Betty’s letter describing her trip to Hadley woods; I have been near to them but never in them. The “Dream Chest” is certainly an odd name for an inn. I went to an entertainment the other day called the “Singing Magpie” which was very funny; something like the Follies. The hall is hung with a sort of tapestry with magpies all over – flying, fighting, eating, laying eggs &c. very funny.

How jolly to find that doerje in the garden. One came to me in a restaurant yesterday but it wouldn’t eat anything, I suppose it was too well fed. But I found a little live ladybird on my coat yesterday, so that must bring me luck. It came today because I have been able to get sugar again; we have been without it for some weeks and saccharine somehow doesn’t taste the same. As for Butta, we don’t know that here. Do you eat it with a spoon or do you have to chew it? Oh the only thing I want now is a nice cup of tea, that would be a perfect treat.

Last Sunday afternoon and evening I spent with our night editor Mr. Stuart Moroney who was to be on the Exchange Telegraph Co. staff in his young days when Estlin Grundy was there. He has a charming country house with large garden at Champigny, ten miles from Paris on the banks of the Marne which are not unlike those of the Thames at Richmond where the Terrace is, except that there are fewer houses. His wife is American born and they have two little girls, Sylvia (7) and Constance (3) dear little things; the elder is something like what Betty used to be; she told me very gravely she had had a dream about a ball that she threw up into the air and it never came back: “I suppose”, she said, “because it got beyond the pull of the earth.” She likes about stars &c. and has just started playing the violin. The mother paints quite nice pictures and I quite enjoyed being in a house with children in it again; the parents would hardly believe me, for the two babies lead them such a dance, and the mother never gets away from them, same as you used to be—tired. So of course I said “Aha! what about three??” . . . . . Eh?

Tomorrow is the first anniversary of Frank Grundy’s marriage, and he has taken his day off to celebrate it in the country. What glorious weather we are having! I don’t remember such a summer for years. I can just scrape along with my “new” suit and an old grey one – a colleague has just come in complaining he has had to pay £16 for a new suit. Prices are simply ridiculous here: £1 for a common poor cotton suit of underwear, I refuse to buy any. I hope it won’t be long now before I am beside you, and then I shall need fitting out completely.

Goodbye, darlings all, from your loving elderly 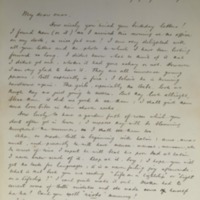