Letter from Adolph S. Ochs Jr. to his mother outlining changes in his career.

I have just received your letter dated Jan 1st.

For some reason your letters always seem to take the attitude that I deliberately surround myself with “mystery” - and I never want to let you know where I am or what I’m doing. Why? Mother, dear why? It worries me that you seem to know so little about me - and every little thing that you hear from other people seems to worry you. For example, you seem all “up-set” over the fact that I didn’t cable you that Julius & I had seen that Mr. Somebody who used to sing in the Presbyterian church. I’m quite sure I wrote you about him - but, mother, even if I forgot it - it’s not really tragic

No matter how much I write you never seem to get news of me. For example, my commission as First Lieutenant is dated October 8. Your letter of Jan 1. addressess me as “2nd Lieutenant, Cavalry, U.S.R,” VanDyke knew about my promotion in December, because I have letters from him to that effect. Funny that, up to Jan 1, you knew nothing about it.

I have written all of this many, many times, but will repeat it, just to keep you from thinking I’m “peculiar” - bless your heart:

About the middle of December, following a row with Capt. Viskniskk I was relieved from duty as Treasurer of the Stars & Stripes, and was sent to Bordeaux as a local representative of the S&S. Lieutenants Ayers, Cartinhour & Wilson were relieved about the same time. We all thought that we would be sent home in a few weeks but Cartinhour was the only one who got away. As to the “merits” of our row with Viskniskki I refer you to Sgt Woolcott’s letter which I mailed you a few days ago & which should reach you about the same time as this.

After about three weeks at Bordeaux I was ordered back to Paris. Acting upon Dad’s suggestion, I applied for a transfer from the S&S & was assigned to the 79th Military Police Company, and am now Assistant Provost Marshall of the 79th Division. I think I was to have been transferred anyway, but I beat ‘em to it with my application.

Since the first of last week, I am have been in Paris attending the Courtmartial of a man named Mason, formerly a field representative of the Stars & Stripes. The case has been postponed from day to day & I may be here a week longer. After that I will return to my Division at Soilly, a little town near Verdun.

Next week I’m sure to get a letter from you saying that you don’t know anything about me - but I’ve done my best & you at least know that I love you - don’t you.

P.S. It hasn’t been U.S.R. for six months, but you always write it that way. Try U.SA Love A

This is Dad’s birthday. I have written & Mr. Selden has cabled for me -
Give him my best love
A 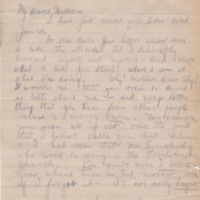