Gentlemen of the Congress: I have asked the privilege of addressing you in order to report to you that on the twenty-eighth of December last, during the recess of the Congress, acting through the Secretary of War and under the authority conferred upon me by the Act of Congress approved August 29, 1916, I took possession and assumed control of the railway lines of the country and the systems of water transportation under their control. This step seemed to be imperatively necessary in the interest of the public welfare, in the presence of the great tasks of war with which we are now dealing. As our own experience develops difficulties and makes it clear what they are, I have deemed it my duty to remove those difficulties wherever I have the legal power to do so. To assume control of the vast railway systems of the country is, I realize, a very great responsibility, but to fail to do so in the existing circumstances would have been a much greater. I assumed the less responsibility rather than the weightier.

I am sure that I am speaking the mind of all thoughtful Americans when I say that it is our duty as the representatives of the nation to do everything that it is necessary to do to secure the complete mobilization of the whole resources of America by as rapid and effective means as can be found. Transportation supplies all the arteries of mobilization. Unless it be under a single and unified direction, the whole process of the nation’s action is embarrassed.

It was in the true spirit of America, and it was right, that we should first try to effect the necessary unification under the voluntary action of those who were in charge of the great railway properties; and we did try it. The directors of the railways responded to the need promptly and generously. The group of railway executives who were charged with the task of actual coordination and general direction performed their difficult duties with patriotic zeal and marked ability, as was to have been expected, and did, I believe, everything that it was possible for them to do in the circumstances. If I have taken the task out of their hands, it has not been because of any dereliction or failure on their part but only because there were some things which the Government can do and private management cannot. We shall continue to value most highly the advice and assistance of these gentlemen and I am sure we shall not find them withholding it.

It had become unmistakably plain that only under government administration can the entire equipment of the several systems of transportation be fully and unreservedly thrown into a common service without injurious discrimination against particular properties. Only under government administration can an absolutely unrestricted and unembarrassed common use be made of all tracks, terminals, terminal facilities and equipment of every kind. Only under that authority can new terminals be constructed and developed without regard to the requirements or limitations of particular roads. But under government administration all these things will be possible,—not instantly, but as fast as practical difficulties, which cannot be merely conjured away, give way before the new management.

The common administration will be carried out with as little disturbance of the present operating organizations and personnel of the railways as possible. Nothing will be altered or disturbed which it is not necessary to disturb. We are serving the public interest and safeguarding the public safety, but we are also regardful of the interest of those by whom these great properties are owned and glad to avail ourselves of the experience and trained ability of those who have been managing them. It is necessary that the transportation of troops and of war materials, of food and of fuel, and of everything that is necessary for the full mobilization of the energies and resources of the country, should be first considered, but it is clearly in the public interest also that the ordinary activities and the normal industrial and commercial life of the country should be interfered with and dislocated as little as possible, and the public may rest assured that the interest and convenience of the private shipper will be as carefully served and safeguarded as it is possible to serve and safeguard it in the present extraordinary circumstances.

While the present authority of the Executive suffices for all purposes of administration, and while of course all private interests must for the present give way to the public necessity, it is, I am sure you will agree with me, right and necessary that the owners and creditors of the railways, the holders of their stocks and bonds, should receive from the Government an unqualified guarantee that their properties will be maintained throughout the period of federal control in as good repair and as complete equipment as at present, and that the several roads will receive under federal management such compensation as is equitable and just alike to their owners and to the general public. I would suggest the average net railway operating income of the three years ending June 30, 1917. I earnestly recommend that these guarantees be given by appropriate legislation, and given as promptly as circumstances permit.

I need not point out the essential justice of such guarantees and their great influence and significance as elements in the present financial and industrial situation of the country. Indeed, one of the strong arguments for assuming control of the railroads at this time is the financial argument. It is necessary that the values of railway securities should be justly and fairly protected and that the large financial operations every year necessary in connection with the maintenance, operation and development of the roads should, during the period of the war, be wisely related to the financial operations of the Government. Our first duty is, of course, to conserve the common interest and the common safety and to make certain that nothing stands in the way of the successful prosecution of the great war for liberty and justice, but it is also an obligation of public conscience and of public honor that the private interests we disturb should be kept safe from unjust injury, and it is of the utmost consequence to the Government itself that all great financial operations should be stabilized and coordinated with the financial operations of the Government. No borrowing should run athwart the borrowings of the federal treasury, and no fundamental industrial values should anywhere be unnecessarily impaired. In the hands of many thousands of small investors in the country, as well as in national banks, in insurance companies, in savings banks, in trust companies, in financial agencies of every kind, railway securities, the sum total of which runs up to some ten or eleven thousand millions, constitute a vital part of the structure of credit, and the unquestioned solidity of that structure must be maintained.

The Secretary of War and I easily agreed that, in view of the many complex interests which must be safeguarded and harmonized, as well as because of his exceptional experience and ability in this new field of governmental action, the Honorable William G. McAdoo was the right man to assume direct administrative control of this new executive task. At our request, he consented to assume the authority and duties of organizer and Director General of the new Railway Administration. He has assumed those duties and his work is in active progress.

It is probably too much to expect that even under the unified railway administration which will now be possible sufficient economies can be effected in the operation of the railways to make it possible to add to their equipment and extend their operative facilities as much as the present extraordinary demands upon their use will render desirable without resorting to the national treasury for the funds. If it is not possible, it will, of course, be necessary to resort to the Congress for grants of money for that purpose. The Secretary of the Treasury will advise with your committees with regard to this very practical aspect of the matter. For the present, I suggest only the guarantees I have indicated and such appropriations as are necessary at the outset of this task. I take the liberty of expressing the hope that the Congress may grant these promptly and ungrudgingly. We are dealing with great matters and will, I am sure, deal with them greatly. 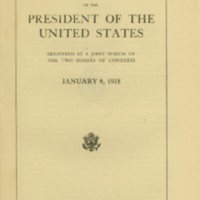