While the contents of this letter may possibly be somewhat out of date by the time it reaches you, nevertheless you may find something in it of interest.

This has been one of the most complexing and trying weeks of my existence over here. The President was taken violently sick last Thursday. The attack was very sudden. At three o’clock he was apparently all right; at six he was seized with violent paroxysms of coughing, which were so severe and frequent that it interfered with his breathing. He had a fever of over 103 and a profuse diarrhoea. I was at first suspicious that his food had been tampered with, but it turned out to be the beginning of an attack of influenza. That night was one of the worst through which I have ever passed. I was able to control the spasms of coughing but his condition looked very serious. Since that time he has been gradually improving every day so that he is now back at work,—he went out for the first time yesterday. This disease is so treacherous, especially in this climate, that I am perhaps over-anxious for fear of a flare-back—and a flare-back in a case of this kind often results in pneumonia. I have spending every minute of my time with him, not only as physician but as nurse. Mrs. Wilson was a perfect angel through it all.

In addition to these anxieties and worries, the workings of the Peace Conference have been very discouraging. The President was more or less depressed, just before he became sick, because of his inability to bring about results. While he would not admit it, he must have felt undoubtedly the lack of needed support from the American peace delegates. Colonel House has the reputation over here as being the “Great American Acquiescor,”—the champion Yes, Yes man with Lloyd-George, and Yes, Yes with Clemenceau. Correspondents have told me that this attitude has embarrassed the President very much when he had to make bold and fearless decisions. One hears these things constantly over here. I have had great difficulty in restraining some of the most important newspapermen from writing articles on the Colonel. One had an article prepared called ”The Great American Acquiescor”; another had prepared one, “The Champion Yes, Yes Man of the Peace Conference”; another, “The Modest Colonel House”; but I persuaded these men to withhold the articles, telling them how it would embarrass the President.

I shall not go into the GEORGE WASHINGTON matter, as that will be a dead issue by the time this letter reaches you. But the news of its coming has had the desired effect on the French. It caused them to get a move on themselves, and they were very much alarmed for fear the President would go off and leave them high and dry. The French are the champion time-killers of the world.

I wired you yesterday that the President is making progress now by his force and by hammering them along.

Publicity matters are hard to handle over here. Colonel House, Secretary Lansing and others are constantly giving out statements that do not agree with the President’s viewpoint. The Colonel, while meaning good, gives out statements telling the correspondents not to take things too seriously, that a compromise can be made—and this news, or rather news of this kind, is very harmful to the President, as it gives the French the impression that the Colonel is speaking for the President, and then the French say the President is simply bluffing. It also gives encouragement to those who are unfriendly to the President, such as the correspondents of the SUN, TRIBUNE and other papers.

I cannot thank you enough for your thoughtfulness in sending me word from Mrs. Grayson and the boys. You can’t imagine how comforting this is to me.

There’s lots more I would like to write, but I am hastening to get this off to you by the courier, who is leaving in a few minutes.

Of course, if the President knew I were writing he would join in affectionate regards.

Please convey my kindest regards to Mrs. Tumulty and the family, and with all good wishes for yourself, believe me, 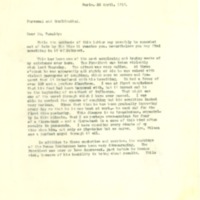