Copies furnished as noted:
Number 488. January 13th. Confidential. For the Chief of Staff.
Paragraph 1. With reference to your cablegrams 558 and 588 and my cablegram 457 have had entirely frank conference with Prime Minister Clemenceau and General Petain. Have now a definite understanding with the French satisfactory to them and to me that our divisions now in France shall complete their training as already begun. In the future divisions arriving in zone of French army are to have a period of training with the French, each regiment in a French division. When sufficiently experienced by training in a quiet sector with French, our divisions are to be united under their own commanders and will be placed in the line in our own sector.

Paragraph 2. To avoid reduction by French of number of organizations in their divisions have offered them four colored regiments now here or about to arrive and offer has been accepted. This offer conditioned on return of these troops to our forces when circumstances make it possible to incorporate them into our divisions. Paragraph 3. At the same conferences secured agreement by Clemenceau and Petain to our acceptance of British proposition outlined in my cablegram number 487. Discussion with both Prime Minister and General Petain was characterized by utmost frankness on both sides and it is believed we have a complete understanding. Expect within a few days to have meeting at my headquarters with Field Marshal Haig and General Petain.
Pershing. 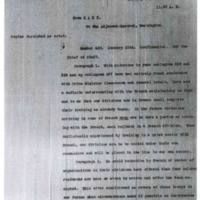