25 June, 1917Personal and Private.Senator Williams of Mississippi called my attention to a case the other day which involves some serious possibilities, and I am venturing to write you a confidential letter about it.Albert B. Dockery, First Lieutenant in the Tenth U. S. Cavalry, now stationed at Fort Huachuca, Arizona, is a Southerner and finds it not only distasteful but practically impossible to serve under a colored commander. The Tenth Cavalry is temporarily in command of Lieutenant Colonel Charles Young, who recently relieved Colonel D. C. Cabell, and I am afraid from what I have learned that there may be some serious and perhaps even tragical insubordination on Lieutenant Dockery's part if he is left under Colonel Young, who is a colored man. Is there or is there not some way of relieving this situation by transfering Lieutenant Dockery and sending some man in his place who would not have equally intense prejudices?Woodrow WilsonHon. Newton D. Baker,Secretary of War. 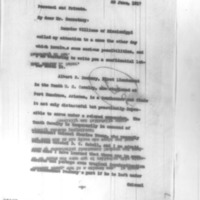