Jessie Wilson Sayre writes to her aunt and uncle about her travels to India to visit her sister and to Italy for a treatment for her husband’s arthritis.

We were more than delighted to get your dear letter of February 23d. with all its news of Frances, Woof, and your dear dear selves. I am copying out the details about Woof to send on to Woodrow this morning.
I am sorry you were worried by not hearing. I am a poor correspondent any way and have been worse since I came back from India instead of better as I had expected to be. It was good just to relax and read and walk and see the children when we could and be lazy after that rather strenuous trip. Frank was very busy writing his impressions of our trip and I was able to be of some assistance there but otherwise I have not been a very useful member of society since I came back! I had a bad cold for a month which makes my only excuse.
Now we are doing some really heavy resting here, and it shows how much better Frank is that he is really enjoying it. When we first reached Europe I don't think he could possibly have relaxed like this. The trip to Indiainterested him so much and was such a change from his work at home that it rested his mind and now he is able to rest his body.
We were urged by Margaret to try this arthritis cure if we possibly could. She had heard fine things of it. Finally we found we had a three weeks interval going a-begging before the children's vacations began and we decided to “try” it any way.
The hotel is in a little town near Padua which is very quaint and worth roaming about in the afternoons. All around are old volcanic hills underneath which flows an endless stream of hot water and mud, sulphurous, radio-active (so they say) etc. etc. In the reservoirs it actually bubbles with its own heat. Frank is baked in mud for 20 minutes, stewed in hot sulphur water for ten, made to rest an hour, massaged and made to rest another hour. During the first hour he can eat his chocolate & roll breakfast. By the time it is all over dinner at 12 is ready. During the second hour he reads a history of Europe very faithfully and studiously.
After dinner we take a long walk two or three hours over the flat roads through the vineyards or up the hills. Hercules rested in one village with his bulls, hence the name “Torreglia,” Petrarch lived and died in another, Galileo taught in Padua, Lombardians, Romans, Venetians, French etc have all fought here. Napoleon stole the pictures from a big monastery we visited. The Armistice in the Great War between Italy & Austria was concluded in this hotel which was Diaz's headquarters. So there is much beauty, romance, history and interest whereever one turns here.Frank joins me in dearest love to you both, dear, dear, Uncle Arthur and Aunt Agnes, and love to Frances and warmest greetings to Woof. 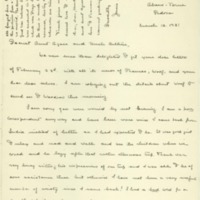