Francis B. Sayre, Sr., the husband of Woodrow Wilson’s second daughter, Jessie, was born on 30 April 1885 in South Bethlehem, Pennsylvannia. He graduated from Williams College in 1909 and earned a law degree from Harvard University in 1912. Frank Sayre married Jessie Wilson on 25 November 1913 in the East Room of the White House. The Sayres had three children, Francis B. Sayre, Jr., Eleanor Axson Sayre, and Woodrow Wilson Sayre. An expert in criminal and international law, Sayre took a job as professor at Harvard Law School in 1917, and was appointed special envoy to the King of Siam in 1923. After his wife’s death in 1933, he held several positions in academia and the foreign service. Frank Sayre died in Washington, D.C., on 3 March 1972.

Frances Sayre left instructions that the personal letters between Jessie Sayre Wilson and her husband were to be destroyed. After some discussion with Woodrow Wilson Presidential Library, Sayre family decided to save them for the time being with the donated collection and restrict access to the correspondence.

The initial loan agreement with WWPL has never been updated in any way to show that other material is available for researchers. So, all access to the collection is still limited to only those who have obtained permission from Thomas Sayre, the grandson of Francis and Jessie Sayre.

Series 1: Francis Bowes Sayre. The largest series in the collection contains personal and professional correspondence, articles and speeches given by FBS, diaries, material from trips made with Wilfred Grenfell in Labrador and Newfoundland, papers from FBS’s time in Siam, mementoes and writings from WWI, photographs, and material relating to various Sayre family members including Blanche Nevin, Robert Heysham Sayre, Martha Nevin Sayre, etc. 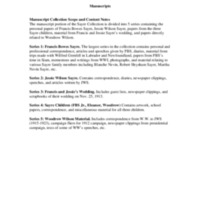