Wiliam C. Adamson shares two proposed provisions regarding price control that he believes will control prices for consumers and prevent extortion and cornering.

HOUSE OF REPRESENTATIVES
Committee on
Interstate and Foreign Commerce
Washington.

Before you close your bill drafting I want you to write me a bill if you please, I want it to contain two provisions. From reading about the efforts of lawyers for three thousand years, I do not believe we can rely on fixing maximum and minimum prices for producer or consumer to prevent extortion and cornering but I believe we can put the kibosh on them by the following two provisions in substance: First, limit the profit which the first purchaser from the producer may realize above purchase price and transportation costs to a certain percent, and in like manner limit the profit of each person who subsequently deals in the article until it reaches the ultimate consumer. Second, provide that during the period of this war whenever any commodity is held in large quantities for speculative purposes, some authorized governmental agency shall order it to be placed on the market and sold at the market price, that is, what it will bring. On the refusal of the owner to sell as ordered, an authorized agent of the Government shall take possession of the stock, advertise it and sell it and pay the proceeds to the owner. That provision confiscates nothing but the owner to act a rascal and rob his neighbor. It provides for paying the owner all his property is worth. He has no right to starve his contemporary in order to extory high prices from the next generation. 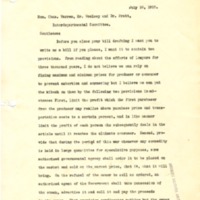