and you set in that background. When your letters come they bring me glimpses of the earth the air and the light as seen nowhere else but in America- you dont know that you do that but you do sometimes with just one casual word, sometimes with a thrillingly beautiful description such as of your walk in the snow with the little goblins company and the silence broken by the soft fall of the snow from the pines. Gosh- it brought tears to my eyes tears of longing to see it all and yet not really unhappy tears for it all lives in my consciousness and I was actually seeing it through you. Indeed I exclaimed Am I not seeing it too Are we not one But a country side can get hold of one in some extremely vital part of ones being so that if one leaves it one feels a kind of tearing in ones being- isnt that so? You and Faith felt that about California even though there was nothing to prevent you from going back immediately and you knew you would be back there soon. And you precious sister stand out clear against the beloved background as familiar as it is and not forever and forever a new creation a new manifestation of the beautiful soul that you eternally are. So there is always in your words as in your notions the unexpected the new discovery of you revelation, that comes to me in all its freshness. You are an infinitely fascinating person, did you know that?
Gerry certainly sounds like a real person, and too as if he had something in him attuned to the fineness of our Faithie, something which sharing joins them on a high plane. I mean it looks as if they had something fine and high in common that will enable them to ascend together instead of one pulling the other down as so often happens when two live together.
Another whole day has gone by and it is partly my fault partly not. I was feeling lazy and inert with the heat this morning - this page was written yesterday- so I just lay on my back and read instead of writing to my loved sister. So I am going to finish this letter within the next half hour before I have to dress for dinner willy nilly and then write you soon again, really and truly.     When I opened your last letter and felt its thickness I was like someone who has suddenly received a legacy- I felt the thickness and weight several times and luxuriated in the thought of the riches I held in my hand before I even started to read and the letter turned out to be a treasure trove as all they are never little 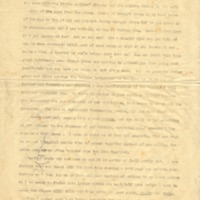