Margaret A. Wilson writes Woodrow Wilson to congratulate him on his Armistice Day speech, and to give him news of her professional life..

My precious wonderful Father, The elections and the ovation to you on Armistice day and your speech have made me so happy that nothing else in the world seems to matter. I believe that you will see America walk in the way you pointed for her, and your great work fulfilled.
Its hard to talk with you about myself and my little affairs with this great happiness possessing me, but I want to write you a few lines so you will know how greatful I am for your beautiful letter. It was so like you, dear, big, understanding Father.
It is not a matter of pride to decide my career without you, dear Father, and I shall certainly not make any irrevocable decision before consulting you. But I do want to thrash out the whole matter carefully before talking to you about it-- partly because consulting at such a long distance is so hard. The scene shifts between letters. For instance the position I wrote you about last week I have definitely decided to refuse. This is because of Mr Broenniman's advice. He says that there is nothing against the firm that offered it to me except that they are very small and are Jews and in the business world give the impression of being the hustling, "Potash and Perlmutter" kind of Jews-- honest but very Jewish. He said that he felt that it was not fitting in his mind that your name should be connected with this firm. I realize that in choosing a postion I must take into consideration not only the facts as they are but as they seem to be, for the sake of the dear name that I carry, but which does not really belong to me. I happen to know that one of the heads of this firm is a rare kind of Jew with high ideals. It was his idealism and his almost idolatrous love of you that drew me to him during the slight acquaintance I had with him before the position was offered. But if his firm gives the impression that Mr Broenniman describes that ends it for me. The fact that they are Jews did worry me, even before Mr Broenniman advised against them. Mr B is as jealous of your name as I. That fact and the fact that he knows the business world makes him a very good adviser.
I have another idea which I am going to thrash out this week. The difficulty is not going to be in finding a job that is open to me, but in choosing rightly. Any door is open to me-- your name is the open seasame, but I want to be sure before I knock that I want to enter, carrying your name. So I am just going to take my time and go deliberately and wisely. I have a very definite idea of the kind of work I am fitted for and in which I would be happy. That I want to discuss with you later. Possibly when everything is all thrashed out and a position of the kind I want offered to me I will jump on a train and go to Washington to talk with you.
The reason I was so definite about not needing any more money was that the checque you have just sent me will last at least until Christmas and by that time I will surely have settled on a job. I am not fretting in the meantime because my mind has a definite objective which is practically sure of being reached-- no more anxiety and suspense for me for the present at least! Suspense is worse than any pain to me!
Thank you precious, precious Father for your beautiful letter. How it gladdened my heart!

With a world of love for you from, 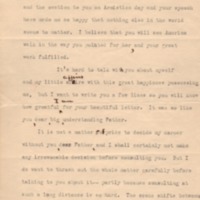