Margaret A. Wilson writes her sister, Eleanor Wilson McAdoo, with news from the Aurobindo ashram in India.

This little letter must follow up the long one because your dear oh so dear cable came about an hour after the last letter was mailed. The cable arrived on my American birthday, and as I was born in America (This time) it is my real birthday although here it is the seventeenth. You see we are twelve hours ahead of you here. I had a hunch it would come on the seventeenth but had stopped expecting it when I mailed the letter - and then it came as a glad surprise. Oh that one word love from you, how much it said, you who have learned so much about self-giving. Sri Aurobindo in an exquisite little poem that I shall try to find for you said that even God is the servant of love, that he is Lord and ruler of the Mighty but to love he must respond, because love is self giving. I am giving an interpretation of the poem that he gave to one of the disciples who had misunderstood it. In his translation of the Gita are these lines as nearly as I can remember them- To those who ask of me I give that which they ask, but to those who ask nothing but give themselves, I give myself and the boons of my love. There are endless ways of giving oneself to Him for he is omnipresent and you have learned much about self-giving. I would say that self-giving is your ideal and characterises your life more and more and you have already received one of the greatest boons of his love - Peace. Sri Aurobindo and the Mother are very insistent that we pray or call for Peace for they say that without it there can be no sure basis for spiritual unfoldment. Did I promise you in my last letter, the recent one, a copy of a small pamphlet that was written for those only who will hold it sacred, not for publication? I want you to have it for it will give you some idea of the miraculous power and glory of the two seers whom we worship and follow here. I simply cannot convey to you in my own words what I feel about them. I have not yet been able to see them with spiritual eyes, as this man did, for I am not developed to that point, but something in me responded to Sri Aurobindo's presence in his writings, and to the marvallous vision which they unfold to the mind, else why did I come? 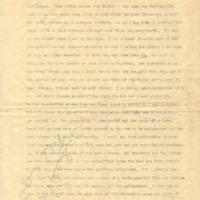