Margaret A. Wilson writes to Eleanor Wilson McAdoo with news from the Aurobindo ashram in India.

I had better repeat Mr Cohans address too- It is Mr Emanuel Cohan, Care F Greenfield and Co 500 Fifth Ave N.Y. You can trust his discretion absolutely. During the last nineteen years that he has been making out my income tax he has never breathed a word to me about anybody else's income and they handle big income tax returns every year. Of course their business depends partly on their not discussing their client's business with others. As I said in another letter, you will have to write him something if only to say that no income tax will be due on my personal return, as he will wait for a letter from you before sending in my return. (I mean no tax on the Fox money).
If, by the way, you do not understand my remark about lowering the tax for you by carrying out the suggestion in this letter ask your lawyer to explain. I think that although I would deduct the tax I pay on your seven thousand dollars before sending you my check this arrangement would make your income tax lower by placing you in a different category of tax payers and thus makeing the tax on the rest of your income less, than if the seven thousand dollars appeared on your return. Is this as clear as mud darling? Gosh I am a mountain groaning to bring forth a mouse when it comes to money matters!

I hope especially that my letter of November 20th has reached you because it was largely about our darling Faith and the situation in which she finds herself. Oh I hope you are not worrying dreadfully about it for that will pull you down so and not help her. The little darling has been caught in a wave of thought and action that has spread all over the United States if not the world- no wonder her vision is obscured. Ellie's Mary Ellen ran away to get married- no doubt for the same reason that made Ellen want to run away to marry. Anyhow the desire to be independent of parents and "free" was back of her experience too, although Ellen, like you, has talked frankly and as an equal friend to Mary Ellen all her life. And dear Ruth Knott's Margaret also ran away to marry. Ellen, by the way, did not even know for many days where Mary Ellen was for she simply disappeared- naturally she went through agony. Now she is reconciled to the marriage but I don't think myself it will last. So you see the young people now-a-days have to learn through their own experience without the benefit of our advice. I suppose this has always been more or less so of young people- I don't think we waited for Mother's advice to decide our actions, -but the young people of today are more defiant of their elder's ideas advice than we were- don't you think so? But Faithie will become again your closest dearest friend for she is different from the others. I shall not be a bit surprised if one of these days soon you write me that Faith has dropped her defiant mask and is taking you entirely into her confidence and listening again to your wise advice. I remember once my Ellie's being a little impatient with me one day for saying that both Faith and Mary Ellen were remarkable children- that was when Faith was in New York. She said "you know very well that they cannot be mentioned in the same breath- Mary Faith is so superior to Mary Ellen that she belongs to a different order of beings," or words to that effect. How about that for an impersonal Mother?

Please try not to worry about the war either, darling. I, with you, have been feeling so unhappy over the destruction of the beautiful cities and works of art in Italy that I was actually weeping about it. I had to tell the Mother about it. She reminded me that such destruction had ocurred before in the history of the world and that it was inevitable. But she said the time will come when the new creations of God inspired man will far excel anything that has been done by man heretofore. I said "I suppose the time will come when even the paintings of Learnardo and Michael Angelo will seem like the work of children compared with the new forms of beauty?" And she said that was bound to happen so I promised to think of the glorious future and not moan over the passing things. But it is hard. I moan more over the possible destruction of Saint Peter's and the Vatican with all they contain than I do over the possible death of thousands of Italians! Isn't that hard hearted?

Well precious darling I am going to send along this most unsaisfactory letter. You will feel the love in every line of it and the love that it fails to express.

December 6th.
I held this letter a day in order to write to Mr. Cohan in the same mail. I have written him and the two letters will go in the same mail, so he will be prepared for the suggestion that I have made in this letter. By the way, I do not understand how I could have been so stupid as not to see long ago that it will be incumbent on you to let the fifteen thousand dollars appear on my income tax return and not on yours, as you have received that amount of money for me under power of attorney. That is, this will be necessary if there will be another tax due for both of us in March in addition to the December tax, which I am presuming you will pay on the whole amount you have received for all of us, lawyers and all. Anyhow you will do as the lawyers advise, so I am not going to worry about the matter any more, but just wait and see. I hope to goodness that there will not be a double tax because in that case you will have a treble tax to pay, as I suppose you pay income tax to the state of California. I hope that you will have enough left to be a good investment. 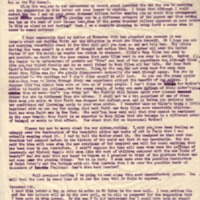