This illusion of space seems to have almost paralysed us both- I got into a panic before your first letter came thinking of every kind of disaster that might have happened to you, and then when I got it I was so relieved and enriched by it that I just enjoyed it and let the time slip by without even thinking of answering it. Then the space complex began to work- I sent notes to friends in America on post cards in envelopes thinking I know they will be disappointed when they open this and find only a postal but I just cant help it but when I thought of sending you a quick little note such as I might have in America I would think Oh I can't send her all the way from India just a note and so again day by day slipped by while I waited for time to write that long letter that stands less and less chance of ever getting written the longer one waits. Then about January sixteenth came your darling Christmas letter and about a week later your money order, and now it is the fifth of Februray. Oh darling I hope you have not worried and let your imagination go the way I did mine so foolishly. You see we have both been unusually silent even for us- You from August to December- I from November to when this reaches you (I have given the months when the letters were received not when they were written) I might as well try to settle both our minds about this letter business before I proceed with this letter. Whatever happens to either of us let us promise each other that we will not agonise over not writing to each other. I have suffered the tortures of the damned over not writing to Jessie when she was in Siam- don't seem able to get over it. Now I can relieve you of any such future possibility by telling you the only circumstance that makes me worry. You see I imagine Jessie getting heart sick and lonely even though Frank was with her although probably she did no such thing. Now don't you ever think that you can give me any kind of suffering in the heart- I think I understand you too well for that. The only kind of worrying that I might be weak enough to do again is worrying about your health if I do not hear from you.
So I suggest that about once a month you send me a postal card- keep a bunch of them on your desk, just to tell me how you and Faith are and if you would rather get a card from me than nothing I shall send you post cards at least once a month. How about that? But aren't we funny about the space and time between us. We act as if our reports to each other were newspaper reports and stale if not today's story. I did not feel that way because I was in a foreign country but doubtless you did because you felt that home news was different- Well its not. If you told me in detail of something you did ten years ago it would still be interesting to me because you did it. How about the Oliver family? Do you expect people to be bored with the small details of their lives because they happened twenty years ago. The only point is are they interested in the Olivers. If they are every detail will serve to picture the Olivers to them the more vividly. If that is so about imaginary characters- how much more true it is about those we love. Your letters always contain just the little details necessary to transfer me right into the room with you- Why I was there listening to my own letter while you read it to the Katchamankoffs and even saw the expressions on their faces, heard them guessing as to what the magic word was I used at Port Said. You have always had a magic carpet on which have carried us just where we wanted to be, with you seeing and hearing and understanding through your eyes your ears and your mind. So whether your letters are short or long I shall eat up every word of them, but don't worry about the long intervals if they happen (For any reason except thinking that the news is stale) for one long letter from you or any letter for that matter for you pack so much into a short one lasts me for a long time. Now mind you no worrying about me and particularly about our relationship for is it not one of the most perfect you have ever known or known about? You have given to me out of the riches of your heart and nature without limit and never have you failed me in any way. Oh darling it is so wonderful to be able to love any one as deeply as I love you and you have called forth that love by your character by your nature by your love and by your inner Beauty.
Now don't let your imagination suggest that I am looking forward to departing from 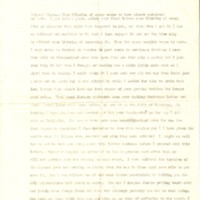