This will really have to be a short note, so I shall start with what has to be said and end up with what I have time to say.

Your letter presented the question of writing more now in a different light and it seems to me that you might well do as the Post suggests without ruining the book. I thought they wanted you to go on with the story, and I did not see how that could be done without changing the whole character of the book, as the story, from the point where you left it, would have to be largely your own life story (which I think you could make very interesting in another book, as I said.). But if all they want is scattered reminiscences of Father you might be able to add a number like the epilogue, and so make a very significant ending to your book, along the lines you suggested in your letter. I am sure that you could do it artistically and more easily now, perhaps, than later, while you are still in the atmosphere of the book mentally. You have your stride now; why not say all that you have in your heart and mind to say about Father while the memouries are coming of themselves without forcing. I am getting enthusiastic about the idea! You see later when you have gotten absorbed in your art again, your mind might close down on the memouries, and it might be hard to get them started flowing again. Remember Doctor Babcock's rule "DO it now." I'm afraid it is not mine, but it sure is a good rule. Couldn't you just lengthen out the epilogue in a series of conversations with Father? You will know how to do it, you dear little artist, that you are.

Well the pean of praise still goes on, and I am made so happy about it for my darling little sister that worked so hard and so conscientiously on her labour of love. Mrs Richard Mansfield said just now over the telephone that it was "beautiful and fascinating." I told her that I would tel tell you what she said and she exclaimed "Well she must be hearing just such remarks form all sides," and I told her that you were, but that you liked to hear from discriminating persons, which pleased her. Well she is a sensitive person, though not an intellectual, being the artist type and nothing more. But as an artist she is very sensitive and to me she would be frank, and she is really crazy about the thing, both the content and the way you have done it. I read in the Readers Digest (!!!) an article about people who had to use exclamation points questions italics and so forth to cover up the fact that they had nothing to say, and I thought again what a pure style of your own you had developed, just because you had something to say and did so without affectation or trying in anyway to show off. You certainly showed an unerring sense of how to do it- I am more and more convinced of that

Now about your health-- I am glad indeed that you are resting, for there is no doubt about it that you were tired out and that some of your symptoms were due to fatigue-- But I would do as Doctor Fishbaugh wants you to, for, if you do, he will take care of you and prevent anything from developing from small beginnings. I read (Also in the Readers Digest !!) an awful description by a nurse of a bunch of patients that she was nursing, all of whom had developed what they had in the way of disease from the smallest beginnings that they had neglected to do anything about. Of course I am not in sympathey with worrying about evey symptom that ones has, but I do think that pain of any kind is a danger signal and ought to be investigated. So please, let Dr Fishbaugh take care of you in his own way. He is capable, but of course he has his own system and can't be expected to look after you well in any other way. So please, darling, when you are through with your rest cure go and have the examination. Lots of men have such an examination once or twice a year and avoid all kinds of trubles that way, you know. The reasons I don't are two-first that I can't afford it and second I am a coward. You can afford it and you are not a coward.

This morning I walked in woods carpeted with snow! Every tree had on its fleecy mantle, and the little brown feathery meadow grass glowed in the sunshine, against the white carpet. The beauty made me fairly cry out, and I wished so for you and Faith to see it. I calculated the time in California (ten oclock,) and wondered if you were looking out at your beautiful mountains and if they had snow on them yet? I thought of Faithie in school and wondered if she was stealing a look at her beloved mountains.

Perhaps some day we will be walking in woods together again. I must say that Northern California has it on your part when it comes to woods. Weren't our pine woods at Car beautiful. I still think your southern mountains are the most beautiful in this country and mountains and sea together do more to me than anything,-- mountains by themselves are enough for me, for I am mountain crazy. But this dear intimate beauty here is lovely and I am so thankful to be able to enjoy it again intimately by walking and stopping from time to time to gaze. I say with Lawrence-"Oh the sheer extacy of being alone"- and to be alone in woods or mountains what more could one ask. But I do want to share them many times with those that love them, like my Nellerit with her artists eye, and Faithie with her seeing heart.

Gosh I just can't stop when I start writing to you!

Thank you for your beautiful, beautiful letter-- I love you more than it will ever be possible to say.

Faithe wrote me a darling letter--  I'll answer it soon. 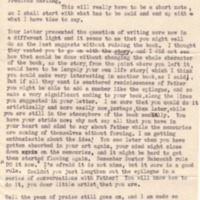