Charles Catlett writes Eleanor Wilson McAdoo a letter to inform her of the establishment of the Wilson birthplace, and to ask for family photographs.

The enclosed will not doubt interest you.

I do not know whether you are familiar with your father's birthplace, but it is a well built brick building constructed in 1846.

The contractor and builder was Mr. Fifer who was the father of the Fifer who was subsequently the Governor of Illinois. It has attractive lines and can be made very charming and, when properly restored, will be worthy in every way of the distinction which has come to it by being the birthplace of Mr. Wilson.

The present Committee considers all of its work temporary in that it hopes and believes that within two years a National Organization will furnish ample funds for the complete restoration of the building and the setting it aside in perpetuity as a memorial to Mr. Wilson.

Nevertheless, what we do is having in mind what will probably be the broader plans of a National Association, and I write to bespeak your interest, your advice and co-operation.

The local Garden Club is taking charge of the temporary development of the very attractive yard and garden. I think you would be pleased to see it.

We are seeking to collect what we can in the way of things connected with Mr. Wilson and particularly of the period at the time of his birth.

We of course would like to get photographs of your mother and also of all the other members of Mr. Wilsons family.

You may be assured that the whole matter is being approached in a dignified way and in an attitude of respect towards our great War President.

Any advice or assistance which you can render us will be most gratefully appreciated.

I am sending a duplicate of this letter to Mrs. Sayre and Miss Margaret Wilson. 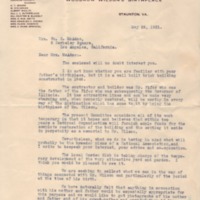