Margaret A. Wilson writes Woodrow Wilson to explain her plans to promote a prize fight.

I received your letter telegram this morning. I have not seen the news item you refer to so I don't know exactly what it said. But it is true that I have engaged managers to conduct a fight for the benefit of the community councils. I am much distressed to learn that this news is worrying you, but it is too late for me to draw out now. I believe, Father, that you are mistaken in thinking that this arrangment will discredit you or me. Before planning it I consulted with friends and since then have talked with numbers of persons about it and not a single person has seen anything undignified or inappropriate about my doing this for a public cause, with the exception of Doctor Devol-- I mention him just to be literally honest- his opinion has no weight with me. Everyone has said the same thing, that boxing has an entirely different status now from what it had, because it is a legalized sport. Before it was legalized it was chiefly the rabble that attended prize fights. Now when you go to one you see your best friends. I went one night with Caruthers Ewing and saw Mac and Ribbs and many other "nice people" there. You must surely be thinking of the way prize fighting was regarded when you were young, or before it was legalized, and the standards of it raized by the present rules.
If there is any harm in this action of mine it is already done, for I cannot deny now that I was engaged in getting up a fight. If I should call off the fight infinite harm would result, for the community councils, which have been hanging on by the eye teeth, depeniding on my word of honour that I would get them this benefit this summer, would go to pieces and a great movement be put back years and years. I tried getting the money through private subscription and simply could not do it. The rich people are feeling so poor, now that the government takes two thirds of their income in taxes! The secretary of the community councils telephoned me the other day that he could not hold the councils together more than a few weeks longer without the money necessary to keep the meetings going. I then gave him my word again that the benefit would come off.
I am not the first person by any means to do what I am doing. There are benefit fights every year in New York. Miss Ann Morgan started the precedent sveral years ago for devastated France and there has been a fight every year for three years for the milk fund for the poor. Bishop Soemebody -his name has escaped me for the present-approached Mr Texas Rickard the other day for a fight for the Big Brothers and I understand today from the manager of the Polo Grounds that the Big Brothers have secured the grounds for their fight in October. If "The Church" can stand the connection with prize fighting I guess we can. Honestly, Father darling, you are mistaken. If I had not been sure of what I was doing I could never have undertaken it.
Now, if by any chance there should be any criticism in the papers, I will make a statement to the effect that you knew nothing about this plan.
By the way when the fight comes off my name will not be associated by itself with it. There will be a long list of patrons with names of undoubted worth and dignity. I shall see to it that the publicity will be taken care of in a dignified manner.
I asked two of the most unsophisticated and simple minded persons I know today, two women from Texas, what they thought of a prize fight for Charity and they both exclaimed "what a good idea." Mr Caruthers Ewing, who is a worshiper of yours, was the person who suggetssted this way out of our Community Council difficulties to me.
I hope that I have said enough to ease your mind some, at least, dear Father. The thing has to be gone through with now, so please try not to worry about it. It will soon be completely forgotten, but if your daughter failed the community councils the results would not be forgotten for a long time.
I am still waiting on Mr Baruch to settle the other matter.
Oh dear I am so sorry to have worried you!
With worlds of love from, 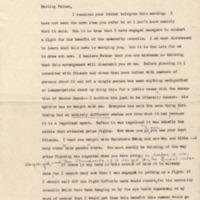