I have just written the wife who is still in Washington to congratulate her on our thirty seventh wedding anniversary on the 5th and I am now writing you old man to congratulate you on the move you are making in going to Los Angeles to live.
I have read what the papers had to say in-re to the move, but I hope it will eventually mean that you land just where you belong, and that my vote will help put you there.
Soon after seeing you in New York last October I accepted the above firms offer of $6.000.00, to represent them here as their manager-we are correspondents of A.A. Housman & Co to whom I had your letter. I was anxious to locate with them up there or in Washington, where my family are, but that was impossible and I accepted this offer, which brought me back home where I saw the light of day 65 years ago. Many, many changes in the last twelve years down this way, very few of my old friends left. I went in to congratulate Capt. Jim English on his 84th birthday, on my arrival here October 24th, I told him he had me beat 20 years in age, but I had him skinned six years in citizenship, as he had only lived here 59 years.
Here is health, wealth and happiness to you in your new home. I was there when a boy in 69 and 70, sailing from New York on the old steamer Fulton, Captain Horner, taking 24 days to make the trip, crossing the Isthmus on that snail of a train and having time to jump from the train, gather a few bananas, and then catch it again. With every good wish to you and yours, I am
Your devoted old friend 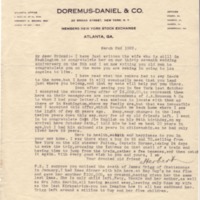