Woodrow Wilson writes Arthur Brisbane to assure him that the Espionage Act will not apply to the President or any of his official acts.

I sincerely appreciate the frankness of your interesting letter of April twentieth with reference to the so-called Espionage Bill now awaiting action of the Congress.
I approve of this legislation but I need not assure you and those interested in it that, whatever action the Congress may decide upon, so far as I am personally concerned, I shall not expect or permit any part of this law to apply to me or any of my official acts, or in any way to be used as a shield against criticism.
I can imagine no greater disservice to the country than to establish a system of censorship that would deny to the people of a free republic like our own their indisputable right to criticise their own public officials. While exercising the great powers of the office I hold, I would regret in a crisis like the one through which we are now passing to lose the benefit of patriotic and intelligent criticism.
In these trying times one can feel certain only of his motives, which he must strive to purge of selfishness of every kind, and await with patience for the judgment of a calmer day to vindicate the wisdom of the course he has tried conscientiously to follow.
Thank you for having written me.

Cordially and sincerely yours, 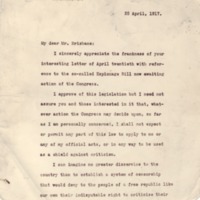