Margaret Wilson writes her father with news from a beach vacation.

Please excuse me for not writing to you for so long; but it is so hard to find time to write letters. We are still having a fine time. Sailing is such fun. I wish we could have a sail boat up in Canada. Will said that he thought that I would be able to manage a boat all by myself by the end of the summer. Jessie and Nellie have begun taking sailing lessons too. I have same headache still when I read so we have decided that I had better not read at all for the rest of the summer and so give my eyes an entire rest. Everybody is so good about offering to read to me. I am reading Middlemarch with Jessie and Oedipus with Will. Will and I got up early this morning about five o’clock and went sailing. It was so nice out on the water in the fresh cold morning air. He read Oedipus while I sailed the boat We went way down to a beautiful place called “Island Heights” on the other side of the bay. Going we had a brisk northwest wind; but coming back we struck almost a dead calm, and did not get home until about half past ten.
A few days ago we took our lunch and went on an all day sail. We sailed as far as Bay Head, and then sailed up a little river near Bay Head and landed on a pretty little wooded point, and had our lunch there. Jessie and Nellie and Pauline did not go. They preferred to stay at home and play. Coming back we had a stronger wind than when we were going. It was so strong indeed that coming through a small channel we had to tack about forty times. Before we reached our own harbour a thunderstorm came up. So we put down our sail and made a tent of it to protect ourselves from the rain. Towards evening it stopped raining and we put up our sail and started off again. Then it got so dark that we could not see where we were. Presently we saw some lights ahead and thinking that they were the Lavallette lights we steered for them. They were really the Seaside lights; a town about five miles beyond Lavallette; but we found that out before we passed the Lavallette harbour. When at last we did get home it was nine o’clock at night. Poor Cousin Florence was so worried about us because we had said we were coming home early so as to take her in bathing. She began lately to go in bathing. Miss Hicks was down here and she thought that it would be good for her. She seems to enjoy it very much. Miss Hicks sent her a nice rolling chair from the Bryn-Mawr hospital. We take her down to the dock in that to go sailing.
I hope you are having as nice a time as we are.
Jessie and Nellie unite with me in sending lots of love and many kisses. 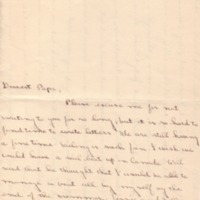