Eleanor Wilson McAdoo writes her mother with news about her trip to Lavallette.

We got your dear letter last night and were so glad to get it.

Isn’t it fine about the mirror. I am so glad that you got it.

We are going in the bay now and I am writing this in my bathing suit while I am waiting for the others. I will not have time to finish it now because here they come. This is written after I we have been in the bay. Last time we went it was just lovely but this time it wasn’t nice at all. We couldn’t find a very nice place to bathe in, I mean the bottom was muddy, and not very nice, and we were quite glad to get into the ocean. We were quite discouraged with the bay and I don’t think we will go there again.We go barefooted most of the time here and it is lots of fun wading in the ocean.I did’nt have time to finish this letter yesterday so I will go on to day. Pauline hasd a toothache to day and so we are going to the dentists ant Toms river. By we I mean Pauline and Jessie and Beth and Mrs Kincaid and I. We are going by train and are going to take lunch there and buy a lot of things. I hope it will be lots of fun.Have you gotten Cousin Marys letter yet about the pistols. I hope you will let us have them because they are really not a bit dangerous. Pauline is very funny about Jessie. She likes her very much and will not do a thing without her. For instance—the sailing partiesyare is divided into two because there are so many people to go, and Jessie and Margaret are in one and I and Pauline are in the other and Pauline will never go because Jessie is not with her, and so I hardly ever have any fun because there is no child along with me but sometimes they invite Jessie and then I have fun. Then just now Jessie handed her a piece of bread and at first she said she did’nt want it and then she asked Jessie if she was going to eat hers and Jessie said “yes” and so Pauline said she wanted hers awfully much.There is not much to tell about and so I must stop. With lots of love to grandfather and lots and lots for yourself 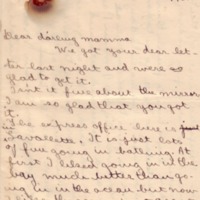