Margaret Wilson writes her father in Scotland with news of the family.

I hope you are having a nice time in Scotland

We had a lovely time on the fourth of July. We did not have any fire works ourselves but we went to the Wests and watched the fire works there. We could not join in them but we sat apart from the other children and watched. They were perfectly beautiful. There were sky rockts, and baloons, and spining wheels and Roman candles, and mines, and fire kcrackers, and lots of pretty things. One mine went up and came down like a fountain. One shot high up in the air and parted into several lines of stars that came slanting downwards to the ground. Before it came down to the ground it looked like a chandelier.

Several of the spin wheels did not work well and would stop turning around. Mr Dullus, who was very daring, would take a stick and knock them to make them begin turning arround again. Once he knocked one of them off of the post it was on, and it rolled all over the ground like a ball of fire chasing all before it.

It was so funny to see Mr Dullus and all of the people that were near it running away But at last Mr Dullus caught hold of it and put it out. There were also bright purple and red lights burning on the ground

After the fire works were over we had a large plate of ice cream.

We read some history and poetry with mamma every day now. We are reading out of an English history named “English Lands Letters and Kings.” We are reading about the Celtic and the early Saxon and Norman times. And about early Celtic literature and also Saxon and Norman early poets and writers. We have read about Caedmon, and Beda, and King Alfred, and Harold the Saxon, and King Arthur, and William the Conquerer, and Richard Coeur de Lion, and King John. And last of all about bookmaking, and the erecting of monastaries, and religous houses, and the lifes of a Damoiselle in those times. It is all very interesting I am reading “The fortunes of Nigel”, the thirteenth of Scot's novels which I have read. Give my love to Uncle Stock and tell him I will write to him also very soon. Good bye. 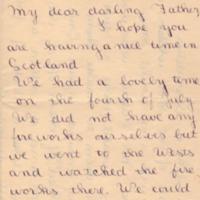