Woodrow Wilson writes to John D. Adams about illustrations for his upcoming publication.

I am much obliged to you for your letter of the ninth.I am afraid that it would be next to impossible to obtain any really new material for illustration,—unless Mr. Howard Pyle would do for us what he did so admirably for Mr. Janvier's articles on the sea robbers and slave traders! The field of uninventive illustration has been again and again exploited.But illustrations can be used which are effective in the best sense, of being really illustrative, even though they have been used before.

The following, e.g., seem to me eminently appropriate for the first article of the series, which will be devoted to describing the Virginia and America into which Washington was born.

1. The silhouette of John Washington which is copied on page 12 of vol. XIII. (new series) of the Century Magazine. That is, if this be the original John Washington, the immigrant into Virginia from England. There is nothing said in the accompanying article about the silhouette; but inquiry could be made.

2. A map of tydewater Virginia,* to occupy at least half a page, preferably an entire page.

3. A photographic view, taken now, of the Potomac river and the opposite Maryland shore, looking toward the Chesapeake, from the site of the house, no longer standing, in which Washington was born. Such a view as I mean will be found, poorly executed, in vol. III. of Putnam's Magazine, at page 2. On page 122 of the same volume you will find a copy of an old print of the house itself in which Washington was born. It would be well worth while to reproduce that, though I do not know how authentic it is. There is a note in Putnam of the source from whence it was derived, and its history could be looked up.

4. A portrait of Colonel William Byrd, of West-Over. See Harper's Magazine, April, 1885, p. 712; and The Century Magazine, vol. XX. (new series), p. 167: a print which seems to me more satisfactory both in size and in distinctness.

5. A picture of Westover, Byrd's seat, such as will be found on page 165 of the same number of the Century. This article has many suggestive illustrations.

6. A portrait of Commissary James Blair. See p. 17 of the Catalogue of William and Mary College, Session 1894-5 (to which I shall have occasion to refer for other illustrations in later papers).

7. Portrait of Alexander Spotswood. See Winsor's Critical and Narrative History of America, vol. V., p. 266, with note thereon at foot of page.These are all the, so to say, really historical illustrations that occur to me in connection with this paper. The next will admit of many more. But I cannot indicate exactly which until I have written it.

Pray write to me for any other assistance in this or any other matter connected with this series that you may desire. I am of course interested to make them as attractive and as complete as possible.

Thank you for engaging the Byrd's book. 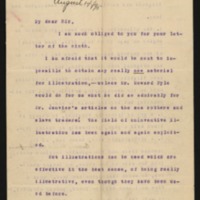