Alvey A. Adee enclosed this memorandum of conversation with the Chinese Minister in letter to Woodrow Wilson

MEMORANDUM
The Chinese Minister called at the Department to–day and informed the Acting Secretary of State, Mr. Adee, that he had received special instructions from President Yuan Shih Kai to make formal expression of the thanks of the people of China and of their appreciation of the just and magnanimous attitude of President Wilson indicated in the public statement recently issued by him which was accepted by the Chinese Government as an expression of sincere friendship toward the Republic and people of China whose aims and aspirations in the establishment of liberal institutions find such ready response in America.
The Minister further expressed the belief of the Chinese Government that the friendship now so happily existing between the two countries will be further strengthened as a result of this policy. 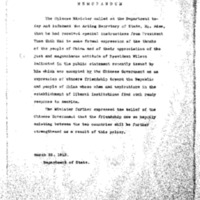