President Wilson asks the Secretary of War about the politics of the State Councils of Defense.

I have read the enclosed (which by the way I have not yet acknowledged) with the consciousness that there is a great deal of truth in it, and yet I want to put before you very frankly this thought: As a matter of fact, because we were obliged to commit the selection of the State Councils of Defense to the Governors of the several States, they have very generally been made in effect political organizations, and presiding as they have over the formation of local units, they have covered the country with a network of organizations which were, I believe most actively useful to the Republican party in the last campaign. I would therefore be very much obliged to you if you would tell me whether you think this impression is correct and would tell me what your judgment is as to the continuation or dissolution of these agencies.

Cordially and faithfully yours,
[Woodrow Wilson] 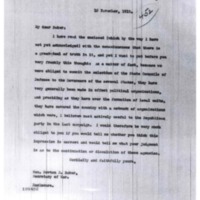