Paragraph 1 At a conference of the British, French and American Commanders in Chief, called today, the 25th, by Marshal Foch to discuss the terms of an armistice with Germany pursuant to the indications contained in the President’s recent letter to the German Government, each Commander in Chief expressed his views on the Military situation and the conditions that should be demanded of Germany. My own views are expressed in the following paragraph.

Paragraph 2 To begin with I agree with the opinion expressed by the Commanders in Chief of the British and French armies and with President Wilson as to the general conditions of an armistice which should provide a guarantee against a resumption of hostilities, giving the Allies a decided advantage and be unfavorable to Germany in case hostilities should be resumed. If the German Government is really sincere in its desire to end the war, then neither the German Government nor the German people should object to strict conditions regarding an armistice. I think that the damage done by the war to the interests of the powers with which the United States is now associated against Germany has been so great that there should be no tendency toward leniency with Germany and her allies in fixing the terms of an armistice.

Subparagraph The military situation at present is very favorable to the Allies. The German forces since the beginning of the counter-offensive on July 18th have been constantly in retreat and have not been able to recover since that counter-offensive was begun. The situation of the French and British Armies can best be judged by pointing out the fact that they have been continuously on the offensive since then, and that they are now attacking with as much vigor as ever. As to the American Army, the part it has taken in the great counter-offensive since July 18th has not been inconsiderable. It is constantly increasing in strength] and training, its staffs, its services and its higher commanders have improved by experience, so there is every reason to suppose that the American Army will be able to take the part expected of it in the event of resumption of hostilities after an armistice. In consideration of these facts and of our favorable situation, the terms we demand should not be light. I therefore propose: First, the evacuation of France and Belgium within 30 days and of all other foreign territory occupied by Germany without delay. Second, The withdrawal of the German armies from Alsace Lorraine and occupation of those territories by the Allied Armies. Third, Withdrawal of the German armies to the east of the Rhine and the possession of such bridge heads on the eastern side of the Rhine by the Allies as may be necessary to ensure their control of that river. Fourth, The unrestricted transportation of the American Army and its material across the seas. Fifth, The immediate repatriation of all native troops of foreign territory now or heretofore occupied during the war by Germany. Sixth, Surrender of all U-Boats and U-Boat Bases to the control of a neutral power until their disposition is otherwise determined. Seventh, Return to France and Belgium of all railroad rolling stock that has been seized by Germany from those countries.

Paragraph 3. The proposal of Marshal Haig are included generally in paragraphs Numbers 1, 2, 5 and 7 of the above, omitting all others, his opinion being that the terms should not be too severe. The views of General Petain are covered practically by paragraphs 1, 2, 3 and 7 of the above, omitting the others. The opinion of Marshal Foch was not given definitely, but it is presumed will be communicated to Washington through the French Prime Minister. 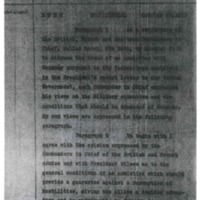