Main points of the armistice.

The Conference of Ministers at a Meeting held on 7th October, 1918, agreed -

To refer to the Military Representatives at Versailles, with whom shall be associated representatives of the American, British, French, and Italian Navies, the consideration of the terms of armistice with Germany and Austria, on the basis of the following principles, accepted on the previous day:-

(It was also agreed that the Allied blockade should not be raised.” 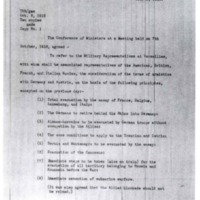