I can’t tell you how glad I was to receive your long, interesting letter of the 14th inst. which arrived last night. It certainly makes me feel good to get such a nice letter from home, especially after being away for such a long time.

First of all, I must confess that I had forgotten the exact date of Rhoda’s birthday; of course, I knew it came somewhere’s around this time but dates have never been my strong point, especially not down here. However, I hope you got her something for me, or if not, possibly you could still do so. Am sorry that I cannot attend to such matters myself but, of course, you know how I am situated. Please let me know the cost of Rhoda’s present.

Was very glad to hear that Rhoda is getting along nicely. Too bad that Paul has another cold; are you keeping him home? I should think it would be advisable to do so while he has the cold and while the S. Flu is still around, but of course, you can judge that better than I can, up there. I wouldn’t worry too much about his habit of not sticking to the truth; of course, it must be corrected and I certainly understand how you feel about it; you may be sure I will do anything I can to help you out with everything when I’m back home, and in regard to that habit I cam sure that when Pauly gets a little older those kind of things will correct themselves, I mean when he is old enough to know how bad it is. He’s a mighty bright little chap and has lots of excellent characteristics,—so don’t worry, he’ll be alright!

We are still under quarantine, in fact expect to be for some time to come. Conditions here in camp are excellent under the circumstances; my former tent mate who, as I recently mentioned in my letter to father, is up in the Base Hospital and has been very low, is now recovering. For a time it was feared that he would not get over his illness. We still sleep out-of-doors, but as the nights are fairly warm, and the weather fine, we sort of like that. Throat inspections and sprays are still being kept up every day. No more than four fellows can now sit at one table in the mess hall so as to avoid their sitting too close together while eating and every day three Sergeants are appointed to take care of this arrangement and see that this rule is followed out. I’ve got that job to-day—reminds me of a head waiter’s job in a New York Restaurant.

According to the newspapers it seems that the S. Flu is not decreasing outside of the camps; Spartanburg has it’s share too, and I hear that people down there are wearing gauze masks when out on the streets. That must be a queer sight!

Was rather surprised that Otto Koechl has already been drafted and especially about his choosing the Aviation service. Well, that’s an interesting branch and is OK as long as he stays in the ‘ground’ corps.

For a time I was also feeling rather optimistic about an early peace, but after our President’s last reply it seems extremely doubtful to me. Of course, no one is able to tell what will happen in the future, and although there is no doubt that Germany will have to come to our terms sooner or later, I do not believe she will see that point yet. However, I hope I’m wrong about that and certainly am just as anxious for a very early satisfactory conclusion as anyone can be.

The furlough orders have not been changed and it is still quite impossible to get any unless there are very serious reasons. I certainly would like to come home for Christmas but that seems very doubtful under present conditions. Of course, I would only be too glad to see father down here but that is out of the question during the quarantine; and then, even under normal conditions, I doubt whether that would be practicable as I would be able to see him only a very short time in the evening and it certainly would not be a very pleasant trip for father—it’s pretty hard to kill time down in Spartanburg during the day time. I think it would be better to see how things turn out in the early future.

It is very good of you to ask me about my birthday but at present I have about everything I need. However, that is still nearly a month off and it is very possible that something will come up in my mind before that time. For instance, my air pillow was smashed about two months ago and since that time I’ve been using one of my comfortors for a cushion. Now that the cold weather will soon be coming along, that blanket, or, rather comfortor, will come in handy as a cover, and so an air pillow will be just the thing. Someone foolishly dropped a heavy box on my bed and that busted the previous air pillow.

Enclosed you will find a clipping about the German prisoners which may interest you.

Too bad about Gustav Elsner. I wrote him several months ago but never received a reply; wonder whether my letter ever arrived. Did you hear from him direct?

There does not seem to be any secret about Louise Franke’s engagement being broken and so there certainly is not need of keeping it quiet as far as I am aware. (Personally I wouldn’t) Mr. Franke wrote or told Cranz about it so I guess people are supposed to know it, otherwise they would possibly not have told me either. I do not believe Mr. Berendt has been out there again, but am not sure.

Too bad you are still having a lot of trouble with help, but suppose we’ll have to await better times before that help proposition improves, The present wages certainly are dreadful! A house is some problem now-a-days—if it were up to me, I’d move into a smaller place pretty quickly—an apartment seems to be the thing in these times. Hope you have been able to get someone to help you with the children!

I had not heard that Lela Franke has been sick, but you will have seen from my last letter to father that Elisabeth is very ill. Mrs Franke again wrote me, in reply to my last letter to Elisabeth, stating that she still has 102 to 105 degree fever and that they had to call in another physician for consultation, so she certainly seems to be very sick.

Well, that’s about all for to-day.With love to you, father and the children.

P.S. I can't even get a nice picture postal card for Rhoda on account of the quarantine to send her any congratulations so must ask you to give a nice birthday kiss for me. Please do not forget to let me know about the present!

Just heard from Cranz that he has been laid up with bronchitis, but is now back in the office again. 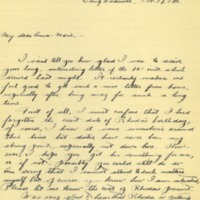