Received you letter of the 1st inst. this evening and was very glad to hear from you again. Am awfully sorry that you are having so much work at home but am, at the same time, very glad to hear that you intend to take it much easier. That’s right, my dear, just take it as easy as you possibly can, even if everything isn’t just the way you would like to have it in the house, that can’t be helped and it certainly doesn’t pay to worry and get sick. I certainly do hope you will very soon find a satisfactory girl!

As I wrote father, the reason I did not take my furlough was because of something I expected to take place down here and which I did not want to mention at the time. However, as things have turned out lately I would not have gotten the furlough anyway even if I had wanted to take it. In the first place the orders in regard to furloughs are very strict,—a man can only get one in case of severe sickness or death in the family and this is especially true since the influenza epidemic has broken out throughout the camps. We are now absolutely quarantined and every precautionary measure is being taken to keep this camp free from this sickness. So far, according to reports, no cases have been discovered in this camp, and just as soon as anyone feels ill or gets the slightest cold he, as well as his tent mates, are immediately put into a detention camp. Several of our tents have been emptied in this way since yesterday,—nothing serious came up but a few men being under suspicion, they and their entire tent were sent away. Now no more than four men are allowed to live in one tent and no two men of one department are permitted to live together, this latter precaution being taken in order to avoid too many men of one department being (sent) possibly sent away. Every day we have several inspections; for instance, yesterday our throats were examined, to-day our throats were sprayed with some kind of fluid and all tents had to be furled to allow the sun to come in. So you see, if the epidemic should come into this camp it certainly won’t be our fault. The death of the two Koch boys is certainly terrible, I had not read about it.

Now as to the reason why I gave up my furlough plans. Every month examinations are now being held for commissions for second lieutenants and so I thought I might as well try for one myself. Several of my companions took the exam last month and some of them were made 2nd Lieutenants and others were sent to the Officers Training School at Camp Meigs, Washington, D.C. In order to apply for the examination three recommendations were necessary so I got one from my Major, another very nice one from a Captain and a third from one of the lieutenants in my department. The second month’s exams started last week and I took part in them. The first day we we went through a physical examination; they took our weight, height, etc., also the blood pressure, and finally stuck a small tube into a vein and drew some blood for testing purposes. As I did not hear anything to the contrary, guess I passed all this O.K. Last Monday the mental exams commenced and they certainly were pretty stiff. They were all in writing—Monday 4 hrs, and about the same amount of time on Tuesday and Wednesday. Well I did have the best I could but have no idea how I came through with it all. They certainly asked some tough questions—about things which I never dreamt about, for instance what is the capacity of a freight car, how many horses can be placed in a car, etc. and I surely had to make some wild guesses. Anyway the exams are now over and the only thing remaining is a personal interview with one of the majors over at Headquarters. This, I think will take place next Monday. What will happen then I, of course, am unable to say, but personally I should be would be very much surprised if I got anything out of it. Even if I have passed the exams, which fact has not been made known yet, there is one thing which will most likely prevent me from getting a commission. All the fellows who took the exams last month were either sent to training schools or got commissions immediately except four men. These four men have German parents; none of the others had German parents! They had not been told that this is the reason they did not succeed but there is no doubt that that is the reason. Of course, one cannot blame the Government for being cautious, and possibly after the Government has investigated their cases, these four men may still get their commissions, but to me that seems very doubtful. At any rate, I’m not worrying about it. I must ask you, however, not to mention to anyone the fact that I am trying for the promotion; for certain reasons I do not want anyone to know until I know whether I’ll get it or not.

Now I want to ask you to do me a favor and that is to get something for father’s birthday for me, that is—if you have time. You probably know better than I what he would like to have and of course even if I did know I could not get anything on account of our quarantine which confines us to the camp. The expense is immaterial and I will send you the money later.I do not know the reason of the breaking of Louise Franke’s engagement; Elisabeth only wrote that they found they were not suited to each other. Haven’t heard from E. in some time.Yes, I will let you know in case I do I need anything, thank you. However, I really have everything I need. I’m even still supplied with some of the cigarettes which father sent me some time ago as I’ve cut out smoking nearly entirely. I guess I didn’t smoke anything but about four cigarettes during the last fours days! Some fellows smoke about twenty every day so you see that my quantity isn’t much.

With lots of love to you, father and the children.

If you are too busy to write another letter, please send me a postcard. I always looking forward to 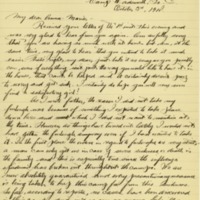