Just a few lines to let you know that I'm still O.K. and managing to kill the time down here.

As usual, nothing extraordinary has occurred except that a new Quartermaster has arrived and that my immediate commanding officer, Major Thibadeau, will also be relieved by a new officer very shortly.

The new Division to be formed here will probably consist entirely of New York men; wonder if any friend or aquaintance will be among them. For their sake, I hope not as this is about the deadest place in the U.S., always excepting the border. However, things could be much worse.

Elisabeth wrote me some time ago that Louise Franke expected to go down South again for the winter, that is—take up her old job. She thought at first that she (Lou) would take up nursing and inquired about the Nurse Training Corps at this camp. All this sort of surprised me but a few days ago I received another letter from Elisabeth stating that the engagement has been definitely broken as Lou & Mr. B. found they were not suited to each other. The whole family seems to feel very much broken up about it and I feel very sorry for all concerned. Please do not mention all this to anyone; Elisabeth wrote it was confidential.

Many thanks for your postal of the 10th. I'm not quite sure whether you are still up in the country but suppose not so will address this to Flatbush.

We've been having quite some rain lately, in fact it has been pouring continuously since last night—i.e. nearly 24 hours. It's very chilly to-day & I'm just now wearing two sweaters! Found myself lying in puddles last night, the rain having leaked through but with the help of my poncho and a rain coat managed to keep comfortable.

Recently wrote father enclosing a check but have not heard whether same has arrived.

In regard to my furlough I can now positively state that I am unable to come up in the very near future, so do not make any plans in regard to same. There are so many changes and re-organizations taking place at present, and some other things pending which I cannot mention at present, that a furlough j now is out of the question. Am very sorry about this, but, of course, one can't do as one likes in the Army.

The diphtheria cases in tow town are gradually disappearing so the quarantine will probably soon be raised. Haven't been in Spartanburg in some time.

Hoping you, father and the children are well, and with love to all. 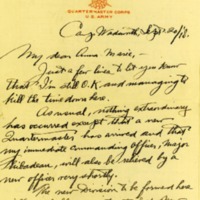