Your letter of the 3rd inst. and also postal of the 10th inst. arrived several days ago. I was, of course, f very glad to hear from you; many thanks.

Was very glad to hear that you and the children are well; that’s the main thing! So you are also having very cool we weather, seems to be the same all over just now as we are also having very agreeable and rather cool temperature. I thought it would be very much hotter down here and I’m rather glad it isn’t. Too bad the servant left but, no doubt, Etta helped you a good deal. Father recently wrote that he has given up his Lake George plans and intends to spend some days with you and the children which certainly will be very nice. Wouldn’t mind being up there myself but we can’t always have everything just to suit ourselves. I could be in a very much unpleasanter place than I am.

It’s now just about a year ago already since my trip to Lake George; that sure was a dandy time! My furlough plans are still up in the air as the Captain has not approved it yet. I spoke to him twice about the matter but he hasn’t done anything yet. It isn’t because there is any reason for delaying it but he simply does not get to it. However, unless unforeseen things turn up I’ll no doubt get the furlough some time this fall.

Didn’t do anything particular on July 4th although we had a holiday that day. Slept until late and then had a wonderful dinner: Fried Chicken, French Fried Potatoes, Asparagus Tips with Butter Sauce, Stewed Corn, Sliced Tomatoes, Mixed Sweet Pickles, Corn Muffins, Bread & Butter, Apple Pie & Ice Cream, American Cheese, Grape Juice Punch—some dinner. In the afternoon I played cards for a time.

The night before the fourth, I was just going to bed, we had quite a spectacular fire—one of our garages with two automobiles and a lot of gasoline was destroyed. We rushed up with pails of water but could do nothing but keep the fire confined to the garage.

Quite a few German Prisoners have arrived recently and, no doubt, will be used for farm work around here. They are, of course, under strict guard, no one can get near them and I therefore haven’t seen them yet. They say they come from the ‘Prinz Eitel Friedrich’ and look very healthy and robust.

Everything else is just about the same as ever—working not too hard and taking life easy in general.

Have been going to Spartanburg Saturday nights lately for a change of scenery but there isn’t anything really interesting down there—it’s a mighty slow town. These Southerners are an awful sleepy bunch! There is a very nice canteen down in town run by the ladies of the town for the benefit of the soldiers and it’s about the only place we can get something to eat at a reasonable price. For instance last Saturday I had: ham & eggs, tomato salad, ice tea, coffee, bread, pie and ice cream all for fifty cents. Of course, tips are out of place as the Spartanburg ladies themselves do the serving.

We expect a lot of new recruits this & next week and that will keep us quite busy again on account of the many rejections in each new bunch. A lot of men are sent down here physically unfit and they have to be paid off and travel money given which, of course, is up to our department.

Recently received a letter from Bound Brook asking me to send them father’s address as they would like him to come out over some week end.

Our new ice plant has now been completed and we will soon have plenty of ice for everyone. Otherwise, as already stated, there’s nothing new.

With love to you and the kiddies. 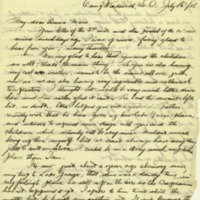