I received your letter of January 24th several days ago and want to thank you for same very sincerely. The reason I did not answer it before was because I had just written to father, and there was, therefore, nothing new to write about. In fact, nothing very remarkable has happened since that time, but I just want to let you know that I’m in the very best of health and taking life pretty easy, at least, when compared to former times.

We’re pretty busy in the office just now, having received the January pay rolls which have to be attended to as quickly as possible so that the men of this division get there January pay. You can imagine how anxiously the men wait for their monthly pay, especially as they generally have it spent before the end of the month is in sight. This job takes us about two weeks and the rest of the month is a cinch.

The quarantine in Spartanburg is still on and so I had to stay in camp all the time. However, I believe it will be raised next Wednesday, and, anyway, as the YMCA here offers quite a number of entertainments, things haven’t been so bad after all.

Monday night we had a pretty good movie show; Tuesday a lecture; Wednesday a band concert; Thursday a splendid movie—David Warrick in ‘A Man’s Man’; Friday a lecture with pictures by Capt. Fiala, the man who rescued Peary and nearly reached the North Pole, this was intensely interesting; Saturday night an amateur performance—songs, music, boxing, etc. So you can see we’re quite well taken care of.

The other day I had the Co. Clerk’s job of this Corps offered me, but as I had enough of the job in the other place, I turned it down. Anyway, I figure that the chances in this office are better.

However, I don’t think there will be a chance for stripes until the division moves, taking the National Guard men away, and leaving the National Army men here. As I already told you, I now belong to the latter. Of course, I’m not absolutely certain that we will remain here, but think so.

This morning I had to move a third time but understand that I am now in permanent quarters. My new tent mates seem to be quite nice fellows and I’m pretty well satisfied, the tent being quite nice, also. Anyway, by moving around, I’ve gotten to know quite a few men of this corps. Buechner has now also been transferred from Co. A, 106th Inf., to the Ordnance Division of the Engineers, which is quite near our place. In fact he eats in our mess hall.

Please tell father that I thank him for his letter of the 1st inst. and will answer soon. The letter arrived this evening.

My cold is now entirely gone and I’m glad to hear that father’s is very much better.

You speak of my ‘promotion’ to the Quartermaster Corps. Of course, the QM Corps is rated higher than the Infantry, in fact higher than any other arm of the service except, I believe, the Aero Service, but actually it was not a promotion, it was a reduction in rank. Nevertheless, that doesn’t bother me in the least, especially as stripes are not so important in this line and the difference is only .20 per day in pay. Please ask father whether the December allotment check has arrived, and if so to send it down to me endorsed, or better yet, another check for $15.00 instead. Not that I need the money just now, having plenty, (I receive my pay on the first day of the month now), but because it may come in handy in the future. As we are most likely going to stay here for some time, I am thinking of buying a small low trunk for my various & numerous things. I am now keeping them in a large bag & in my suit case but a trunk would be much better and can be locked. I guess I can get a good one for about $8.00 to $10.00.

It is awfully good of you to take such an interest in my personal matters, I certainly appreciate it, and you can be sure that I am only too glad to discuss personal matters with you, dear Anna-Marie. I know you understand me. Your remarks about my friendship with Elisabeth, especially, have put me quite at ease.

I’m, of course, forever thinking about home, etc., and am sincerely hoping, also, that peace will soon come. However, I can’t see it quite yet! Even if it does come soon, I guess it would be several months before we’re mustered out, especially our Corps, which generally is the last to quit the service.

I certainly do hope that father will soon be able to get out of MS & Co. and get into the lamp business,—iIt certainly would be the best thing for many reasons.

I suppose Paul will go back to school to-morrow? Has poor Rhoda gotten better again? I do hope so.

I recently wrote Tante Dixie, thanking her for the Xmas box and again for the foot bag. This bag certainly kept my feet warm! Fortunately the weather has gotten warmer, but we’ve had rainy days since 8 days and consequently the mud around here reminds me of Texas! Well, in another month we ought to have ideal weather.

With lots of love to you, father, and the children, 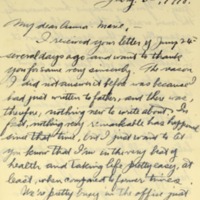