After being on the train over 6 days we finally arrived at our destination, Pharr, Texas (mail address- Pvt. O. Kappelmann, 2Co. A, 23rd N.Y. Inf., Pharr, Texas) on Tuesday, July 11th. The place is only a very small one, but there are various small stores such as druggist, ice cream and soda fountains and many small shacks are springing up right along which will supply the soldiers with eats and drinks. A moving picture place has also been opened up.

After unloading we marched to the camping place and started to pitch tents, but before being through were drenched to the skin by a very heavy rain. In fact it rained nearly all the time for the first three days and as the ground is mostly clay we had a rather uncomfortable time of it. However the storms seem to have passed and it must be over 100 degrees in the shade; as a nice breeze is blowing from the Rio Grande however, we can stand it pretty well.

Our tents are now quite comfortable, 1 squad to a tent (8 men). I live with the 1st sergeant, being company clerk and we have a smaller tent just for us two. All tents are being supplied with wooden floors, and a little later on with cots, and by the looks of things it certainly does not look as though this would be only a temporary camping place. My personal opinion is that we will be down in Texas at least 3 months- some say 6 to 15 months!!! No doubt they will keep us in Pharr for many weeks until the regiments are in A1 shape and then will be sent to the border – we are now about 7 miles away from it. Yesterday I had a fine bath, we have a lot of shower bathes down here, I also had my first experience in washing clothes – I guess I got most of the dirt out of them. This was the first change I made since leaving NY and they looked pretty bad. There are some Mexicans in town but the don’t show up around camp – the regulars have scared the life out of them by this time. One of the regulars showed us a diamond rattle snake 8 feet long which he killed about 1 mile from here. They have quite few around this place, also scorpions and other nice bugs but I have not met any yet. From Monday on we will no doubt start with our regular routine life, -

so you see we will be kept busy right along. We are just getting measured for another issue of clothing which will I think include underclothing as well.

The meals are good but sometimes could be more plentiful; however we won’t starve. I am feeling first rate; just getting over a bad cold.which I got in the train.

Will have to do some sewing now so good-bye. Hope you having a nice vacation in Lake George.

With love to all and hoping everyone is as well as I am, 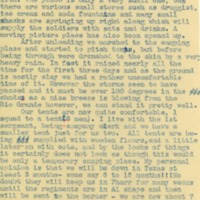