Special to THE___________________
Washington, D. C., August 7. -- President Wilson is greatly pleased with the conference of colored editors and other leaders of thought and opinion among the colored citizens of the country, held a short time ago in this city. The report of the conference has been published far and wide and the proceedings have attracted a larger measure of attention than the report of any similar gathering of colored men since emancipation.

In a recent letter, the Chief Executive of the Nation plainly indicates his deep interest and genuine satisfaction with the meeting and its successful outcome, as well as with the practical results that have accrued from the frank and unhampered interchange of views as to how the 12,000,000 Negroes of the country might most effectively aid America to win this righteous war for freedom and world-wide democracy. The President feels that the problems considered by the conference were "grave and weighty," and he is cheered by the thought that the whole state of feeling throughout the country will be helped by the broad spirit of patriotism which dominated the conferees in their calm, dignified and high-purposed deliberations.

In no uncertain terms, the President warmly commends the colored representatives of the press for their timely emphasis of national unity on the vital issues involved in the war and applauds the inspiring example set by them for all Americans who have at heart the welfare of the nation in its present crisis. The full text of the President's letter to the Chairman of the Conference follows:

PRESIDENT'S LETTER ON SPIRIT OF THE CONFERENCE

Your letter of June 26th has been called to my attention, and I am both interested and pleased with the report it gives of the meeting held in Washington by leaders of thought and opinion among the Negro citizens of the country.

The problems considered by the conference of special important to the people whom they represent, are grave and weighty and the whole state of feeling throughout the country will be helped by the frank and calm consideration given to these matters.

In the meantime, it is cheering to see that the fine philosophy of democracy, which is at this time the inspiration of the great effort of our country, was felt and expressed by these conferees as the dominating thought which ought to control all Americans in the present crisis.

This ungrudging endorsement of the Colored Editors' Conference and sincere tribute to the loyalty of the colored citizens in the cause held dearest to all Americans will hearten the Negro people all over the land. The President's ringing utterance in denunciation of mob violence, the acceptance of colored nurses for war service, and a score of advantageous plans for the induction of the Negro soldiers in technical schools and training camps for officers, followed closely by this exceedingly cordial letter of the President, give ground for belief that the Negro-American is, during these days of national emergency and need, coming to be recognized more and more by the general Government as a factor of importance in the winning of the war. 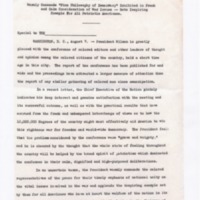